Man sacked for calling S'pore a 'f**king s**t country': 'It was disappointing the lengths S'poreans went to attack me' 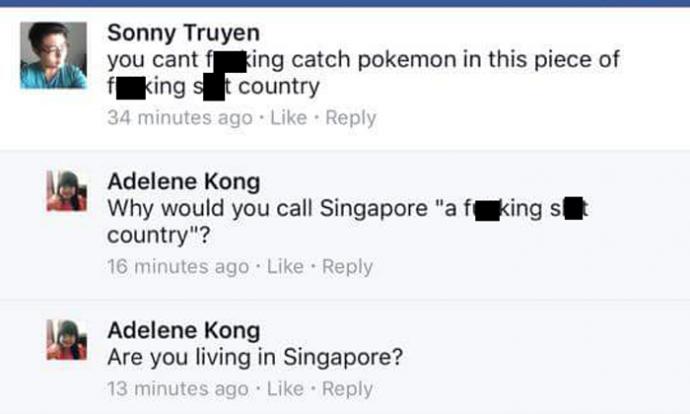 An Australian expat who was sacked after ranting on Facebook calling Singapore a 'f**king s**t country' has expressed disappointment over comments made by netizens about him.

Sonny Truyen made the offensive comments over the weekend, triggered by how mobile app Pokemon Go is not yet available here, reported The Straits Times.

In a statement to online news website Mashable, Mr Truyen wrote: "It was a **** move on my behalf and a very big error in judgment to negatively label an entire country over Pokemon. It was very wrong of me to rage like that."

He also added: "It was disappointing the lengths Singaporeans went to attack me and deny any chance of making amends for my actions."

After posting the insulting comments in social media, Truyen was sacked by property search portal 99.co who hired him as a marketing consultant a week ago.

Chief executive Darius Cheung said he was alerted to the post on Saturday, and decided to immediately terminate Truyen's employment. In a long post on 99.co's blog yesterday, Cheung apologised on behalf of the company.

Other than making remarks about Singapore, Truyen also got into a war of words with Facebook user Adelene Kong.

Kong told Truyen to leave Singapore and the latter retorted that he was "here because of the lack of local talent" and said "locals can't even read".

Related Stories
Man calls S'pore a 'f**king s**t country' -- and gets sacked within a single day
More About:
inappropriate