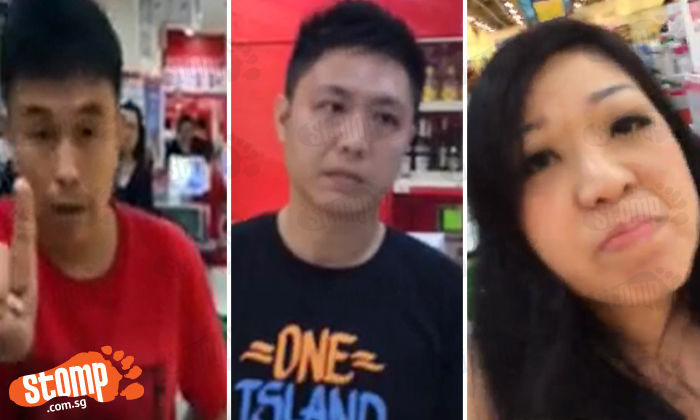 A man who was caught on camera causing a commotion at Kallang Wave Mall on Sunday night (Dec 11) has come forward with his side of the story and new video footage.

In an earlier report, Stomper Lawrence said that the man had been in a dispute with a cashier and then started yelling at his sister for hitting him with a supermarket trolley.

Lawrence added, "Come on... this is NTUC FairPrice... some contact with shopping baskets or trolleys is NORMAL!"

Police were also called in to the scene.

The man in the video, Stomper Long, wrote in to Stomp today (Dec 13) to identify himself as well as explain things from his perspective.

He wrote, "Like what netizens said, whatever [Lawrence] posted is only his side of the story. I regret to inform everyone that even if he is telling his own story, this story that he presented to everybody is not the whole truth, and his video has obviously been meticulously edited."

Long also said that he read some comments from netizens about the incident, many of which were fair and just.

"This has made me extremely touched."

"Swearing to god" that what he says is the absolute truth, he went on to explain what happened.

According to Long, who was shopping with his wife and daughter, he had bought 20 packets of coffee, which entitled him to 10 free packets of coffee from another brand due to a supermarket promotion.

However, he was required to pay for the 20 packets first before he could redeem his gift. Yet after making payment and collecting his freebies, he found that he was unable to leave the supermarket premises.

Long said that both the cashier and a Customer Service employee did not know how to handle the situation. Hence, he stood there while holding 10 packets of coffee, with nobody to help clear things up even after a long time.

"At that time, I felt like a thief who had been caught stealing, everyone nearby was staring at me and I found it increasingly intolerable," he wrote.

"When the Customer Service woman told me that there was nobody who could handle the matter now and I had to continue waiting, I felt some anger.

"I told her loudly that I had already made payment and should be on my way home by now. Instead, I was standing here like a thief."

Long said he then told the employee to get her manager immediately and it was at this time that a woman knocked him with a supermarket trolley.

He added, "I happened to witness that moment when she knocked me and told her in a responsible manner that she had done it on purpose.

"I asked her why she hit me with her trolley and immediately, she went berserk and shouted at me. At the same time, the guy (Lawrence) rushed over and hurled a vulgarity at me while waving his fist.

"They both scolded me but I did not back down. The guy started filming me so I told my wife to do so.

"The woman then rushed to my wife and snatched her phone, nearly dropping it.

"The video from Lawrence that you saw, happened to omit this part where the woman snatched my wife's phone.

"Looking at how they snatched my wife's phone while scolding her, I started filming a video on my phone too."

In Long's clip, Lawrence's sister can be seen gesturing angrily at him and shouting, "I'll get my lawyer to sue you!" in Mandarin for filming her.

Long responded by saying, "He can film me first, but I cannot film him?" and "Do you think this is my first day in Singapore?"

A third party, an elderly man, tried to intervene by explaining that he had witnessed what happened and that Lawrence's sister had not hit Long with the trolley on purpose.

Stomp has reproduced Long's original message in full in the gallery above to retain its original essence.