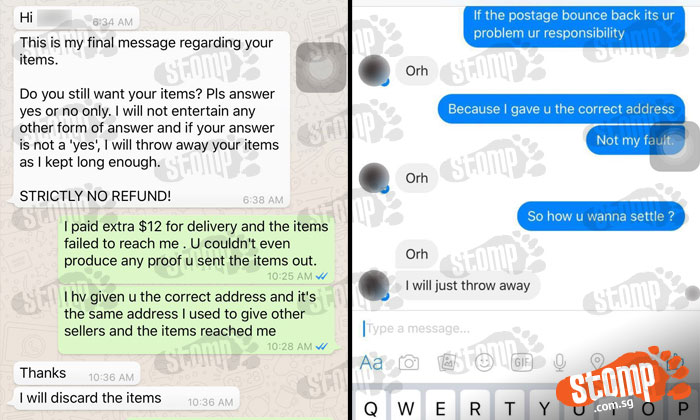 A Stomper shared with us about an experience he had with an online seller.

He told Stomp via telephone and WhatsApp:

"I then used other means to contact him. He then told me that my order bounced back and told me to meet him to collect it.

"He did not produce any proof he sent the items out and he failed to give me the tracking number.

"He asked me to self collect my props or else he will throw it away within 60 days.

"I did not pursue the matter for three months. After that, I contacted him again to ask for a refund. He told me that he did not have any money and could only give me hell notes.

"After posting everything up, he said that he was just joking when he said the items bounced back.

"After that, he came to my condo and told me to make an apology before he gave me a refund.

"I refused because I did not do anything wrong.

"He then told me that he will refund me half the amount first and give me the other half after I make an apology. I took half the refund but I did not apologise.

"I have already made a police report about what happened."

Related Stories
California fitness owes $20.8 million to 27,000 members in unused gym passes
Man pays $3 at vending machine in Bishan -- only to get some 'air-range' juice
Woman warns of 'scary' gift that nearly got her mum kidnapped in the US
If you receive this survey, you might want to think twice before participating