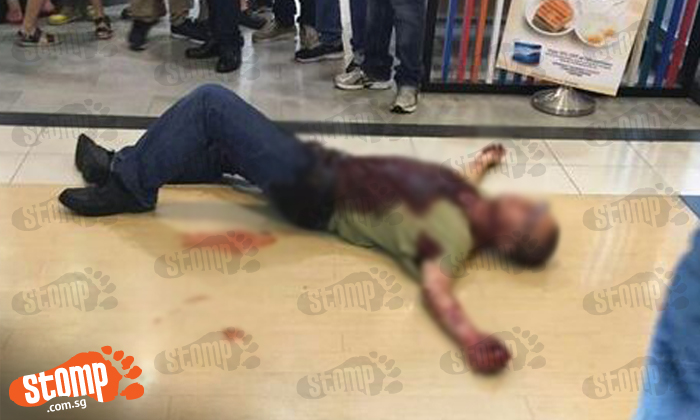 A man was seen lying in a pool of his own blood at Northpoint Shopping Centre at today (Aug 12) afternoon.

Stomper Nel, who alerted us to the incident and sent us a photo of the injured man, said he appeared to have suffered multiple injuries, though it is unclear what caused them.

The SCDF said that dispatched an ambulance after receiving a call for assistance at the shopping mall at 1.22pm.

The man, who is in his 20s, was taken to Khoo Teck Puat Hospital.

"The police received a call on 12 Aug 2016 at about 1.14pm requesting for assistance at Northpoint Shopping Centre.

"Upon arrival, a 20-year-old man was found lying in a semi-conscious state at level three.

"He was subsequently conveyed to Khoo Teck Puat Hospital.

"Premilinary investigations suggest that a case of attempted suicide had occurred.