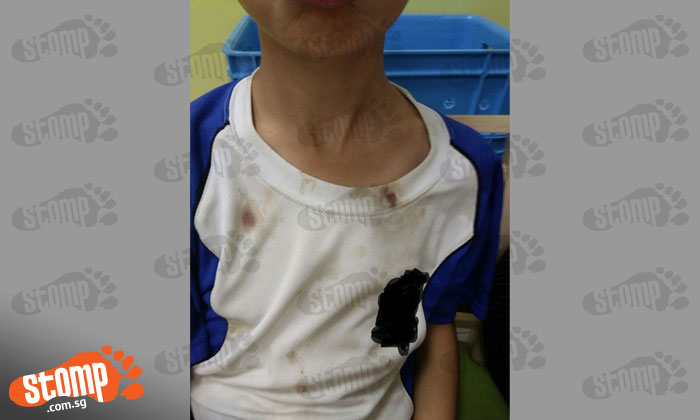 Stomper Sadmum was disheartened when she found her 10-year-old son crying with blood all over his shirt and bruises on his legs yesterday.

She told Stomp that her son had been playing soccer with a friend at the void deck of Block 438 Fajar Road when the soccer ball accidentally hit a toddler who was cycling past.

The incident occurred on May 25.

Upon seeing his crying daughter, the man ordered the Stomper's son to stand straight while he repeatedly kicked the ball at his son.

The first three were aimed at his legs but the fourth bounced off the wall and hit her son in the face hard, causing his nose to bleed.

According to the Stomper the man's daughter attends the childcare centre at the same block.

"Despite the fact that my son apologised profusely to him and his daughter, he abused his rights to enforce such brutal punishment unto my child.

"My son was so traumatised emotionally that his appetite and sleep were affected for days.