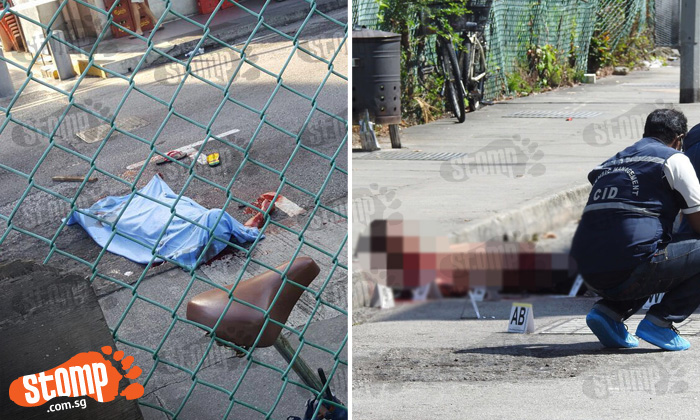 A victim lies bloodied on the road in Geylang after he was killed by someone he got into a dispute with.

A Stomper shared the photos with Stomp at about 9.30am, saying that the incident just happened today (July 9).

The photos show that the incident happened at Lorong 23 Geylang, near the junction of Geylang Road.

Passers-by were seen standing around, looking at the body.

According to the Stomper, the victim was a Chinese man who runs the corner 'Zi Char' stall, and was involved in quarrel with 'an old chap'.

He claims that the old man went back to take something to attack him. The man reportedly had a bleeding head wound.

It is unclear what caused the dispute and what happened to the other party involved.

A regular patron told the Stomp Team that the victim used to work at Lorong 23's Victoria Food Court, but did not work there anymore.

However, he still visits the place frequently.

He said that the man was a very nice person, but was can be a little bit hot-tempered sometimes. He did not know what happened either.

Other patrons said that they saw the victim at the coffeeshop last night as well.

In response to media queries, police confirmed that they received a call on July 9 at about 8am, requesting for asssitance at Geylang Lorong 23.

Upon arrival, a 52-year-old man was found lying motionless at the said location. He was pronounced dead by paramedics at about 8.11am.

Anyone with information is requested to call the Police Hotline at 1800-255-0000 or submit information online at http://www.police.gov.sg/iwitness.