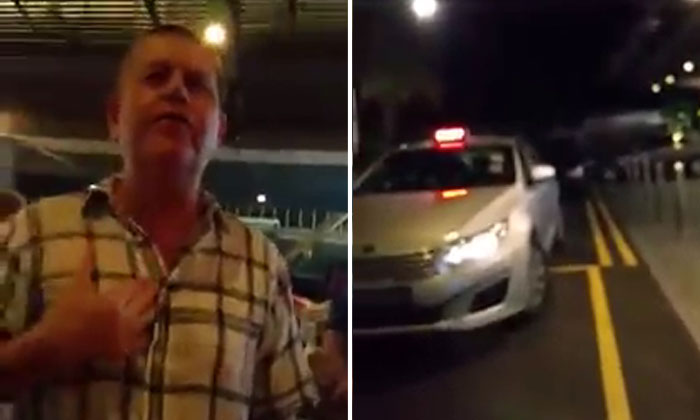 Stomper Edwin alerted Stomp to a video on Facebook showing a Caucasian man confronting a female cabby at the Sentosa Beach Station taxi stand and accusing her of being a racist.

In the video, the man can be first seen asking the cabby to drive her taxi away from the taxi stand.

The cabby tried to explain her actions saying that she was on call. The man however continued arguing with her.

The dispute then continued on for around a minute.

"I was waiting for my passengers at Sentosa Beach Station when this man asked me to f*** off although there were no other empty cabs behind me.

"He first gestured me to move my taxi off to which I ignored.

"He then asked me to f*** off to which I also ignored.

"I only came out when he started banging on my cab. He's just pissed that all cabs coming in are on call.

"Which of part of "BUSY" shown on the cab does he not understand? Furthermore, I was not parked right in front of the taxi stand.

"Just because I'm a lady, he thinks can 'makan' me?

"Sorry hor, wrong 'charbo' to mess with. You wanna take my pictures and all, go ahead.

"I've got plenty of witnesses."

"And which part of "this is Singapore, not wherever you're coming from" is racist?!"

Related Stories
Men brawl with cabby at Changi Village: Netizen alleges they were told to throw their beer bottles before boarding taxi
Guys block car on CTE, and one even rushes over to challenge driver to a fight
Man kicks car and yells vulgarities at driver at Orchard Boulevard
More About:
fight
argue