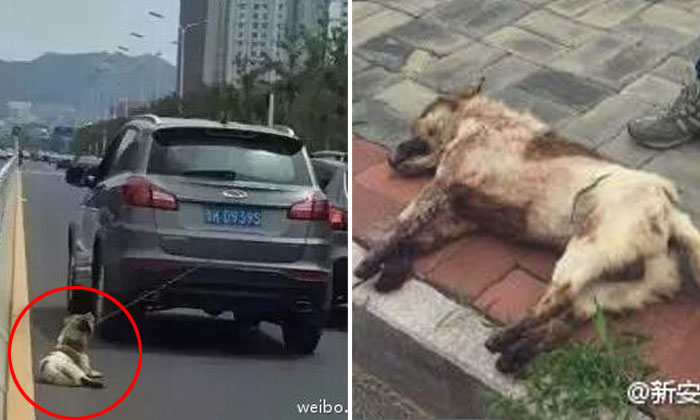 Outrage has erupted online in China over a video of a dog tied to the back of an SUV and being dragged to its death.

The incident occurred on Monday (Aug 1) in Weihai, in China's Shandong province.

The video begins with the dog running as it tries to keep up with the vehicle which is moving forward.

But when the car picks up speed, the dog increasingly struggles to keep up and falls before being dragged along the road for a distance.

Passers-by who had witnessed the cruel act then intervened by surrounding the vehicle to force it to stop, Shanghaiist reported.

However, the dog had sustained severe injuries by then and eventually died on the street.

According to the South China Morning Post, the driver, identified as a 43-year-old man surnamed Qi, was beaten up by some of the witnesses.

The police later arrived and apprehended Qi, as well as four others who had been involved in the altercation.

The cruel act has attracted widespread condemnation on Chinese social media, with many netizens describing Qi's actions as "inhuman" and called for him to be punished.

After pictures and the video of the incident went viral, a man claiming to be Qi's brother said that the dog was suffering from rabies and had bitten other people that morning.

He added that Qi had wanted to take it for treatment, and only attached it to the vehicle because it refused to get into the car, Shanghai Daily reported.

This is not the first time that such an incident has happened in China. In 2014, a similar act in Guangdong also sparked fury online.