Man charged with having brass knuckles: Other scheduled and prohibited weapons in Singapore 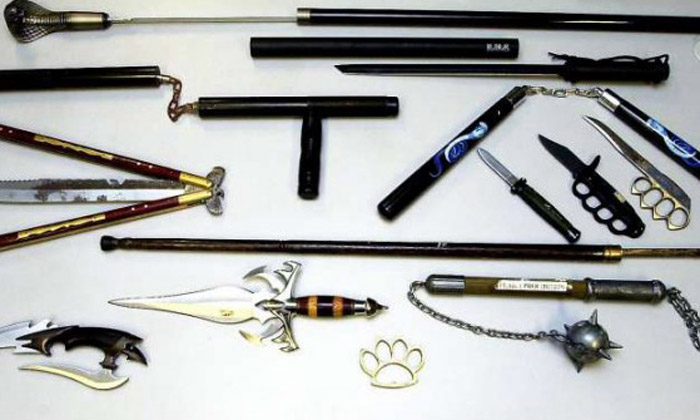 A man who allegedly held a two-year-old boy hostage in a Sembawang flat for 17 hours was charged on Friday (Sept 30) with having knuckle dusters without permission.

Also known as brass knuckles, the metal covering that fits over one's fingers are considered scheduled weapons under the Corrosive and Explosive Substances and Offensive Weapons Act.

While some small but easily concealed items are prohibited in Singapore, you can import guns and stun guns with a permit from the police. But lighters shaped like a gun cannot be brought in.

Read on to find out which weapons are allowed and which are not allowed in Singapore.

Under the Act, there are two schedules of items, one lists corrosive substances and the other weapons.

Besides knuckle dusters, other scheduled weapons include:

Flick knives and gravity knives, which have a blade which is released from the handle or sheath by the force of gravity or by centrifugal force,

Any whip manufactured from bicycle, motorcycle or similar chains,

Wasp knives, which can inject a ball of compressed gas that freezes both human and animal tissues and organs where injected.

Pepper spray is also on this list as it contains corrosive phenols.

Other prohibited items, which are banned from being imported into or taken out of Singapore are:

Concealed weapons, for example a blade disguised as a cane,

Lighters in the shape of a gun or pistol,

Firecrackers and all types of fireworks, including tube-sparklers and "pop-pop",

Knives for hunting, outdoor survival, diving are permitted, according to the police website.

Machetes,sickles and parangs for agriculture and for carpentry are also allowed.

Other permissible "weapons" include blow pipes, axes, leather or rope whips, and bows and arrows.

These can be imported into or taken out of Singapore with prior approval from the police licensing department. Controlled items include:

All types of firearms, air guns,

Toy guns, including pistols and revolvers,