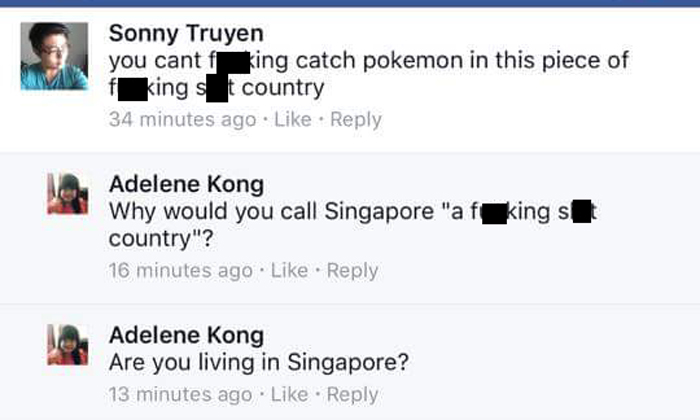 A man who ranted on Facebook calling Singapore a 'f**king s**t country' incurred the wrath of netizens, and was promptly sacked in one day.

Sonny Truyen, who claims he is from Australia, posted the comment on Sunday (July 10):

You would have probably known by now that the Pokémon Go game has captured smartphone users from around the world, and Sonny Truyen was no exception.

The app is currently now available only in US, Australia and New Zealand. It has not launched for the rest of the world yet.

Truyen did not stop there in his social media rant. When confronted, he continued to lash out at netizens.

His comments have since gone viral and circulated on HardwareZone.

He replied to a particular user Adelene Kong, calling her 'stupid'. The latter replies that no Australian she knows behaves like he does.

The Internet, enraged at his comments, started digging up his work information and bombarded his company with complaints.

The man of Vietnamese descent had apparently just arrived in Singapore, and just started his first week working at 99.co as an SEO specialist.

Darius Cheung, co-founder and CEO of 99.co, apologised and responded to the incident on the forum.

He also stated that Truyen has been fired.

"5 years of reading HWZ forum and finally signed up for an account!

"And yes i am the one who hired Sonny as an SEO consultant. (and yes, he has been terminated immediately)

"Thank you for everyone’s reaction, I am a proud Singaporean too and I apologise for the incident.

"I’ve also written a full article regarding this and my related thoughts.

"IMHO, you have every right to be angry at this incident and Sonny specifically, I am too.

"But I also sincerely hope that we would not generalise this to be a sweeping discrimination against Australians or Vietnamese or FT. We are better than that as a society!"

The full apology can be found here.

All in one Sunday's work.