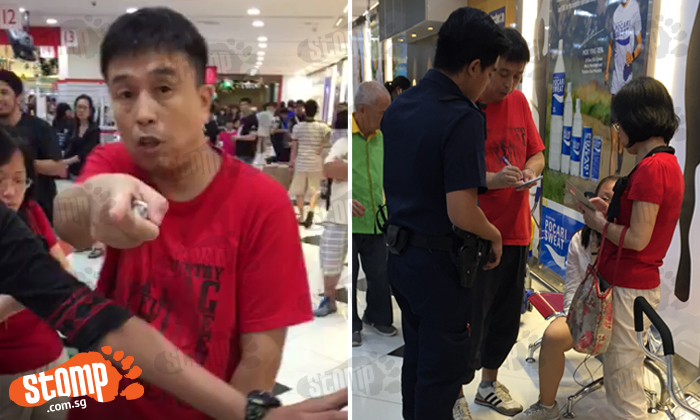 A man was caught on camera making a scene at Kallang Wave Mall yesterday night (Dec 11), after a dispute with a cashier and Stomper Lawrence.

According to Lawrence, the man had shouted at the cashier and then started yelling at his sister for hitting him with a supermarket trolley.

The Police were subsequently called in to the scene, about 20 minutes after the commotion.

Lawrence recounted the incident, which took place at about 8.40pm:

"Bad experience! During our weekly shopping trip, we came across this man who was ranting unreasonably while making payment at Kallang Wave Mall's NTUC Counter 5.

"He was shouting at the cashier and turned to shout at my sister, claiming that the trolley had banged into him.

"Come on... this is NTUC FairPrice... some contact with shopping baskets or trolleys is NORMAL!

"He even forcefully detained us by holding on to the trolley and called the police.

A video from Lawrence shows the man telling other people that the Stomper's sister had knocked into him as well as gesturing for another woman to take photos of the incident.

"I think this is part and parcel of shopping at a supermarket and this is a very trivial issue -- basically a waste of police resources.

"It seems like the man was already very in a bad temper after some argument with the FairPrice staff earlier on. And he is very rowdy and stopped us from leaving."