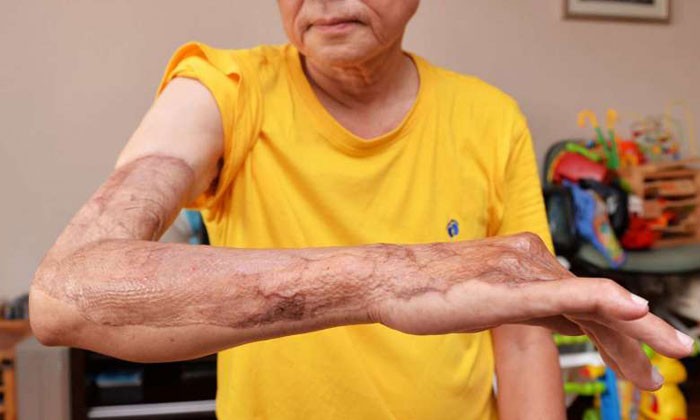 A 68-year-old man had to undergo seven operations after he contracted a flesh-eating disease following a trip to Taiwan.

The man, who wanted to be known only as Mr Huang, was hospitalised for 19 days and had to undergo blood transfusions and skin grafts, including a piece of skin from his thigh that was as large as a B3-sized piece of paper, Shin Min Daily News reported on Tuesday (Dec 6).

Mr Huang told Shin Min that he had gone to Taiwan on holiday in January this year (2016), but started getting chills and felt feverish about 10 days after returning to Singapore. His right arm also swelled up and turned red.

The next day, his arm was covered in blisters that looked like mosquito bites.

He saw a doctor, who applied medication on his arm and bandaged it, but the bumps reappeared a day later, and Mr Huang was taken to hospital.

He underwent an operation the following day.

According to Mr Huang, doctors had told his family to be mentally prepared as he may not survive the operation, and his arm may need to be amputated.

Doctors removed parts of his flesh that had rotted, to prevent the bacteria from spreading.

He added that he could get up only on his 10th day in hospital, after doctors confirmed that his body did not reject the skin grafts and his flesh had healed.

"Doctors told me, only on the day I was discharged, that I had contracted a flesh-eating disease," said Mr Huang.

"Luckily, it was discovered early and I could keep my arm, this was the silver lining."

He is still not sure how he got the bacteria, also known as necrotising fasciitis, and whether he was infected overseas or in Singapore.

Mr Huang, who completed his therapy sessions for his "new" fingers only in November, said he still cannot write or eat with his right hand, and has been using his left hand.

The bacteria can enter the skin through a wound or an insect bite, and penetrate into the fat and muscle tissue, infecting the flesh.

"Symptoms include fever, pain on the infected area, swelling and redness and it is vital to go for an examination at the hospital immediately," said Dr Ho.

"If it is discovered too late, amputation may be required. So, be cautious if a wound does not heal or shows abnormal symptoms, even if it's just a small one."

She explained that the bacteria could be picked up from areas with soil, or if one is cut while handling raw seafood.

"The severity of the infection depends on how invasive the bacteria is, as well as the patient's physical health and skin condition."