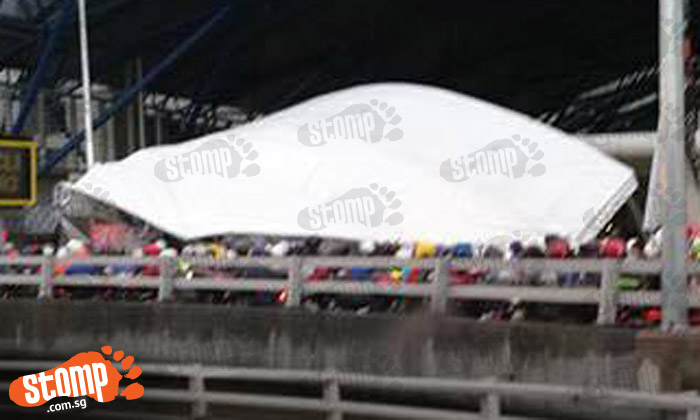 A Malaysian motorcyclist and his pillion rider were injured after two canopies at Tuas Checkpoint came crashing down due to strong winds and a heavy thunderstorm at 5.35am today (Aug 3).

Stompers Sim and Jeff sent photos of the collapsed canopies and the jam it caused.

According to an official statement from the Immigrations & Checkpoints Authority of Singapore (ICA), the canopies that fell were located at the arrival motorcycle and car lanes.

The injured motorcyclist and pillion rider were conveyed Ng Teng Fong hospital, and no car drivers were injured in the incident.

An ICA spokesperson urged motorists using the Second Link to check for the latest traffic updates.

They can do so via the Land Transport Authority’s (LTA) One Motoring website or MyTransport.SG portal before their journey.

The spokesperson added that for safety reasons, arriving cars and motorcycles are diverted to other zones for clearance.

Motorists are advised to co-operate with officers on site.

"The Immigration & Checkpoints Authority will ensure that safety and border security will not be compromised while managing the traffic," said the spokesperson.

"We apologise for the inconvenience caused and seek the understanding from travellers using the checkpoint," added the spokesperson.