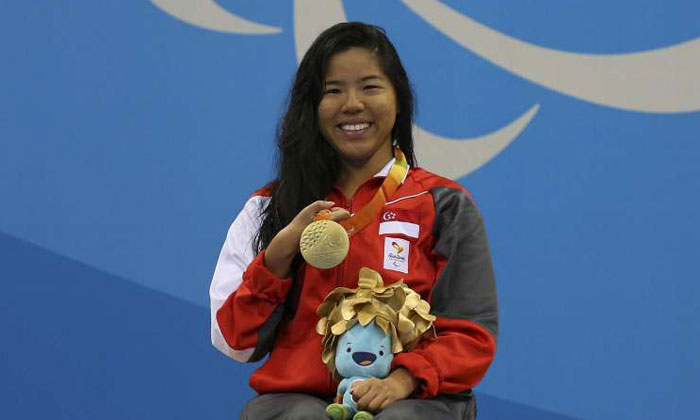 This is Singapore's first medal at the Rio Paralympics, which began on Thursday. Yip won out of a field of six swimmers.

She also broke the world record in the 50m backstroke with her split timing of 59.38s in the same race.

Recounting her record-breaking swim to The Straits Times, Yip said: "I was dying during the race, trying my hardest to pull (my hands). I couldn't really see who was beside me.

"It was really just a lot of mental strength to go my fastest ever and to compete against myself and my previous timings.

"When I touched the wall, the first thing I saw was the Singaporean crowd jumping and at this moment, I knew I got first."

In a Facebook post on Saturday morning, President Tony Tan Keng Yam said Singapore was "so proud" of her.

"When I met Pin Xiu during her training in June, she was still very modest about her chances, but told me she will do her best. She certainly did her best today," Dr Tan wrote.

Yip, who has muscular dystrophy, held the world record for the 100m backstroke (S2) going into the final.

She had clocked 2min 9.79sec for the event at the International Paralympic Committee Swimming European Open Championships in Funchal, Portugal in May this year.

Her new world record that powered her to this win in Rio sees her repeating her golden feat at her maiden Paralympic Games in Beijing in 2008 (when she won the the 50m backstroke in the S3 category).

In 2008, her performances ignited a debate about cash prizes for para athletes, which led to the rewards being doubled eventually.

Related Stories
How much they pay Olympic medallists around the world -- as compared to Singapore
Kid wants to be the next Joseph schooling -- and boy does he have some neat skills!
Girl responds to Tinder match after almost 4 months -- after realising he won Olympic gold medal and beat Michael Phelps
More About:
olympics
paralympics
sports
singapore
Singaporean
swimming