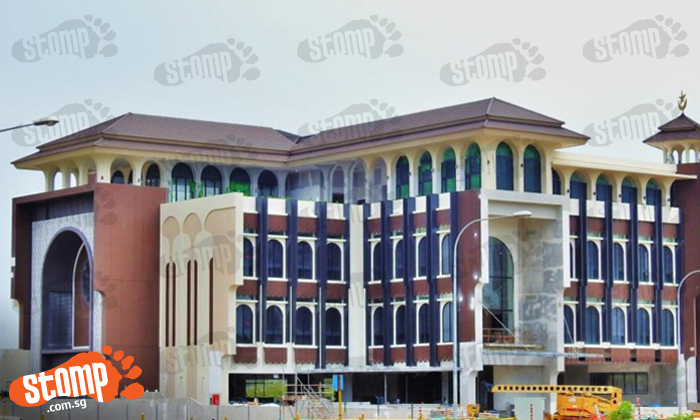 An upcoming five-storey mosque along Woodlands Drive 17 is set to be one of the biggest in Singapore.

"If one happens to travel to Woodlands along Drive 17 near Christchurch Secondary School, they will not miss this huge building which is currently a standalone mosque with no surrounding buildings beside it.

"The five-storey huge structure is the latest mosque in Singapore that seems to be nearing completion.

"It is set to be one of the biggest mosque in Singapore and expected to accommodate up to to 4,200 worshippers according to past media reports.

"The significance of this beautiful structure is , the mosque is named after our First President, Encik Yusof Bin Ishak

"The intriguing part of this majestic structure is the incorporation of a distinctive features like overhangs and a verandah.

"From afar, the crescent moon combined with a star could also be spotted on top of the contemporary minaret design.

"At night, the building resembles a mini palace and certainly a beautiful architectural landmark in the northern part of Singapore which certainly will attract people to sigh in awe!

"In time to come, it may even be a national monument of historical significance."

From Stomper Kannan: "A brand new majestic mosque nearing completion at Woodlands and named after our First President Yusof Bin Ishak. It looks so beautiful."

Another beautiful shot from Kannan showing the up-and-coming mosque in Woodlands.

Related Stories
What kind of a student lives in a mansion like this?
Think this is a castle? It's a dorm room for 2 female students
This Australian town looks dead... because everyone is living underground
More About:
building
woodlands
mosque
cool