Maid's safety in the balance for 15 minutes at Serangoon 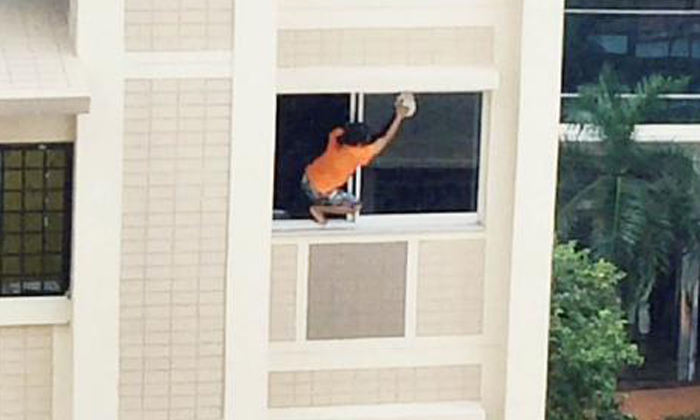 Residents of an HDB estate in Serangoon were shocked to see a domestic worker balancing precariously on a ledge to clean windows on Saturday.

Ms He, a 40-year-old housewife who lives at a block opposite, told Shin Min that she saw a maid climbing outside to clean the windows.

"To see that maid standing on the windowsill, grabbing onto the window to clean it without any safety measures on the eighth floor, it really frightened me," she added.

She said she had wanted to go over to stop the maid but changed her mind when she saw that there seemed to be other people in the unit.

"I wanted to shout at her to ask her not to do that, but I was worried that if I did, disaster may follow if she got frightened so I could only watch."

Mr Chen added that the maid had spent about 15 minutes wiping the windows, most of the time squatting on the sill.

Madam He said this was the first time that she had seen the domestic worker carry out such a dangerous act.

"Luckily, she climbed down safely in the end, much to my relief," she added.

Shin Min approached the maid's employer, who said that the woman had worked at his home for about five months.

He said the maid was hard-working although they had some difficulty communicating.

After he saw the picture of the maid cleaning the window, the employer was shocked and said that he did not know she had done such a thing.

He was normally away from home during the day, with only his mother and children around.

He added that he would advise the maid to be more careful and that he had instructed her not to clean the windows' exterior since it would rain anyway.