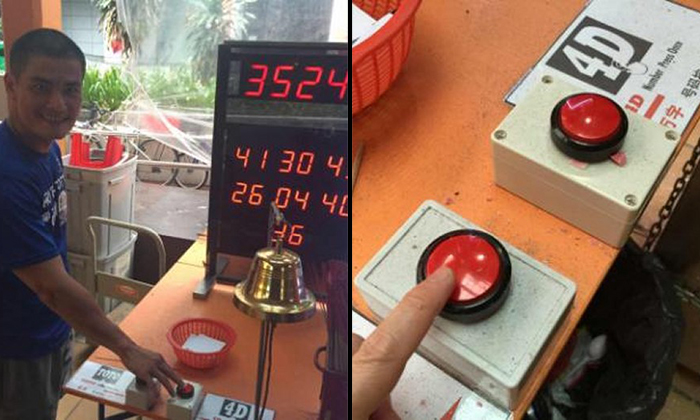 To the Chinese here, there are two types of ghosts that emerge during the 7th lunar month:

1) The so-called 'hungry ghosts' surfacing from the underworld to prowl for food.

2) The 'gambling ghosts' or habitual human punters who are on a heightened look out for lucky numbers.

When the 'Hungry Ghost' month begins, celebration organisers would display scribbled lucky numbers at altar urns after picking the numbers at random from folded pieces of paper following a prayer.

For the 7th month only, there is even a high-tech machine at Maxwell Road food centre that selects lucky numbers for you.

All you have to do is hit the buttons to get 4D numbers and a series of Toto numbers.

It's up to you whether you want to pray to the Goddess of Mercy before you press the button.

The hawker committee in charge of 7th month celebrations at the popular food centre had the machine custom-made about seven years ago, said Mr Ng Kok Hua who runs China Street Fritters stall.

"It was to add interest to our 7th month celebrations apart from having the getai and dinner," said the stallholder who sells Hokkien-style ngoh hiang rolls.

"During lunch time, you can see more people having a go at the machine. We also adjusted the machine to include number 49 when the Toto format was changed in 2014," he added.

So has anyone struck the lottery with the Maxwell quick pick?

Mr Ng believes there were winners, judging from the discovery of 50 dollar notes stuffed into the donation box for the 7th month activity fund at the altar area.

"The committee noted this when the box was opened. Usually the Chinese punters would return to give thanks by donating some of their winnings. But they won't openly reveal that they have won," he said.

But now, it's the stallholders themselves who are in dire need of more luck.

The closing of the centre's entrances at South Bridge Road for the construction of the Thomson-East Coast line has affected their business by about 20 to 50 per cent, reported The Straits Times in December last year.

The hoarding has given the impression to tourists that the food centre is no longer there.

Customers coming from South Bridge Road have to walk around the construction site to Maxwell Road to get to the food centre.

The stall-holders also hope the Urban Redevelopment Authority would extend more parking facilities to the public at its nearby URA Centre after office hours and on weekends.

The hawker centre houses about 100 stalls, including the famous Tian Tian Chicken Rice.

But some stalls have closed shop in recent months, according to stall holders there.