'Machiam' UFC: Man rains blows on another, while children scream and people try to pull them apart 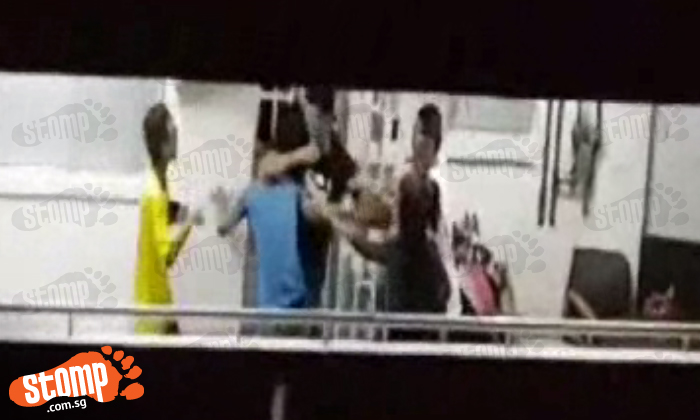 "Curious, I went out of my apartment, and saw that there were two men engaged in a fight just opposite my block."

In the video provided by Johnny, a man wearing a black shirt exiting an apartment is seen using his elbow to mercilessly hit another guy in a blue shirt on his head and back.

Children were heard screaming, and people were seen trying to help stop the fight.

The video also shows a woman carrying a kid, helplessly trying to pull the man wearing a blue shirt, possibly her husband, away from the fight.

The man in a black shirt continued to taunt and challenge the other guy to hit back.

The fight was eventually put to a stop after a man wearing a white singlet stepped in and urged the man wearing a blue shirt to leave with his wife and child.

Related Stories
Wah, 'gangsta' sia! Biker challengers driver to a fight on AYE
Brawl breaks out between two groups at St James, Police have to break them up
New videos show rider (FBL 4329P) chasing and challenging driver to a fight, then hitting and jumping on his car
fight
HDB
HDB flats
challenging to a fight