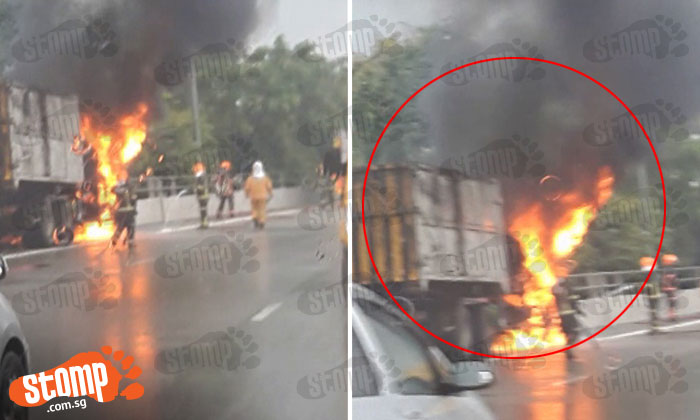 Stomper Peh was driving along the PIE highway towards Tuas before Clementi Road exit at around 12.45pm today (Nov 14), when he witnessed a lorry going up in flames along the road shoulder.

"I was driving past the area when I saw the lorry catching fire.

"I was surprised when the lorry on fire was a Singapore lorry. I think some technical difficulties might have caused it.

"The Singapore Civil Defence Force (SCDF) had just arrived at the scene to put out the fire when I was driving past.

"I'm not sure if anyone was injured.

"Since the lorry was on the fourth lane of the highway (road shoulder on the extreme left), no one wanted to drive in that lane. Everyone was keeping right, and this caused some congestion."

Scdf was alerted to an incident along pie towards Jurong after BKE exit at 1240 hours.

"One fire engine and one red rhino was dispatched to the location.

Upon arrival, SCDF extinguished the fire using one water jet

"Cause of fire is under investigations."