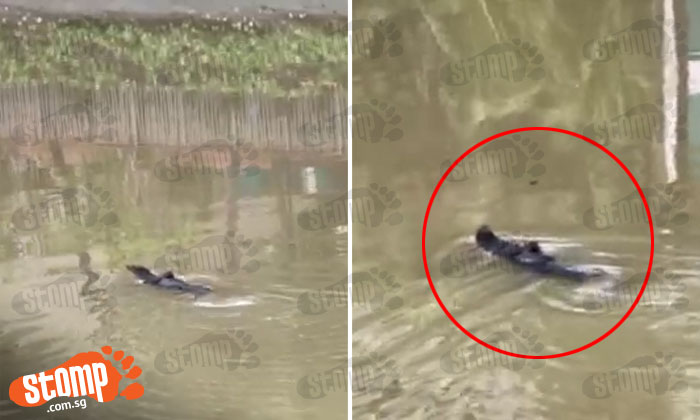 Stomper Kee came across an unusual sight this morning (Oct 30) at a canal beside Block 121 Pasir Ris Street 11.

In a video the Stomper sent, a monitor lizard can be seen taking a leisurely swim in the water-filled canal.

The Stomper was in the area looking at the reptile for around five to ten minutes before he left.

Said Kee in a telephone interview:

"The monitor lizard was quite big.

"I have seen other monitor lizards around here but normally they are not that big."

Monitor lizards are becoming a very common sight in Singapore. We found some useful information on the fascinating creature by NParks:

1. The monitor’s saliva contains over 50 bacteria that infect and kill their prey slowly. Is this true?

The carrion meat that get stuck in the monitor’s teeth are teeming with bacteria that can cause infections in the bite wound. However, the main cause of death of preys is the venom secreted by the monitor.

Contrary to previous beliefs, most lizards do possess glands that secrete venom. While the monitor uses its venom to kill its small preys (symptoms include rapid swelling, drop in blood pressure, and blood clot inhibition), it has a relatively mild effect on humans.

They are naturally shy and would rather stay away from humans. Like most wild animals, they do not attack unless provoked. As long as you keep your distance and leave them alone, you will be fine.

4. What to do when I encounter a monitor lizard?

Do not be alarmed. These animals are shy and will not attack humans unless provoked or cornered.

Do not touch, chase or corner them as they may attack in defence. You are advised to leave them alone. It is fine to observe them from afar.

Seek medical attention immediately if (in a rare event) you are bitten. Although monitor lizards do secrete venom, it is not fatal to humans. The main cause for concern would be bacterial infection from the bite.

For more information, go to: https://www.nparks.gov.sg/gardens-parks-and-nature/dos-and-donts/animal-...