Look at the stars, look how they shine for you -- from the night sky in Woodlands 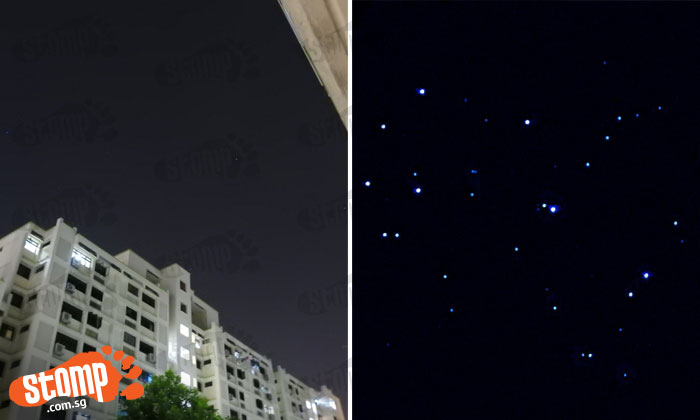 Stomper Kannan sent Stomp a series of photos showing gorgeous photos of the stars he took from Woodlands on Nov 22 at 10pm.

Photos the Stomper sent show the stars glittering in the sky like diamonds on a black pillow.

Other than the mesmerising photos, the Stomper also sent fasinating descriptions of the constellations.

"Stargazers in Singapore will be able to see two of the well  known open star clusters in the constellation of Taurus(the Bull) which are believed to be nearest to Earth and most obvious to the naked eye in the night skies, good weather permitting.

"The vista stretches across this constellation beginning at ‘Pleiades’, commonly referred to as the Seven Sisters(Messier 45 or M45) in Astronomy and ending at the ‘Hyades’,also known as Melotte 25 or Collinder 50.

"From Earth, one can see the Hyades Cluster where its brightest stars form a "V" shape(outlining the forehead of the Bull) anchored by the bright star Aldebaran, a red giant star with a yellowish appearance.

"However, Aldebaran is unrelated to the Hyades, as it is located much closer to Earth at a distance of about 54 light years.

"Managed to capture these 2 star clusters as well as the Orion's Belt from Woodlands which can be clearly seen in the night skies if there is no cloud cover. For readers and Editors information, the Nikon P900 was used to locate them if one would like to get a closer view of them. I have also marked the stars individually from the photo I have taken.

"The Pleiades star cluster is a group of 800 stars, formed about 100 million years ago and located 410 light-years away from Earth in the constellation Taurus.

"A light-year is the distance light travels in one year, or about 6 trillion miles (10 trillion kilometers).

"One of the brightest stars in the cluster is called Atlas. This star, along with its companion Pleione and their seven daughter stars, make up what we can typically see with the naked eye.

"The brightest stars glow a hot blue and formed within the last 100 million years.

"This means they are extremely luminous and burn out quickly. Scientists estimate these stars will survive for more than 200 million years before they die out.

The images taken by the Stomper is a timely reminder for us to appreciate nature once in a while instead of being too consumed in the hustle and bustle of life.

Have a look at the photos in the gallery above.