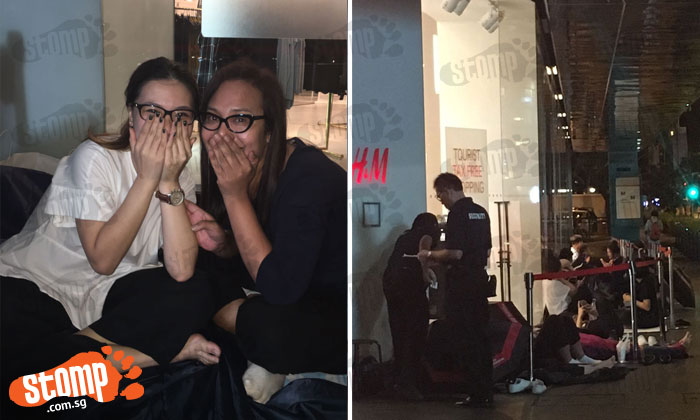 How far would you go for fashion? These women would do just about anything.

Each year H&M collabs with high-end fashion designer brands that draws large crowds much like the last years overwhelming response to BalmainXH&M.

This year, the hype continues for KenzoXH&M where people were seen queuing up days in advance for the launch on Thursday (Nov 3) at 8am, at two of the brands outlets in Singapore: Orchard Building and Ion Orchard.

The Stomp team was around Orchard area yesterday (Nov 2) at around 9pm, when we spotted the queue at H&M Orchard Building.

Many had set up their camps with their pillows, mats, sleeping bags -- excitedly waiting for the launch that was dropping the next morning.

And the Stomp team got the opportunity to speak to the first two ladies in queue.

Sherry Kuhara, 43, and Maria Jessica, 22, first met when they were queuing up for the Balmain launch last year.

Having been able to purchase only an item each during last year’s sale as they were too far back in the queue, they were determined to be the first in queue for the next launch.

“We planned to be the first in queue last year, and have been strategising the execution for the past three weeks,” said Sherry.

“We even researched on the various methods of queuing up for such events to aid our plan.”

Not wanting to repeat the mistake of queuing up at 3am on the day of the launch like they did for Balmain, Sherry started queuing up at 8am on Tuesday (Nov 1) morning, while Maria joined her on Wednesday morning.

“I came here on Tuesday morning and just told the security that I wanted to start the queue for KenzoXH&M, and they agreed,” explained Sherry.

“We’re given half an hour breaks to get food and 15 minute toilet breaks periodically.”

The duo have even come up with their very own game plan once they’re in the store:

“We’re just going to grab everything and decide if we want to purchase all of them later.

However, they pointed out that this year's crowd wasn't as crazy as last year.

"It's quite disappointing to see that the queue is not as long as last years."

They were also determined to stay in the queue whether rain or shine.

“We don’t care if it rains, we have umbrellas and some shelter here.

“We will do anything for fashion because we are true fashionistas!

“We’re really excited for the launch, and we can’t wait to wear the pieces as they are more wearable than Balmain!”

This morning (Nov 3), the two ladies went home happily after purchasing their goods.

“All shoppers were given 10 minutes to get what they wanted, and Maria and I are really satisfied with our buys!” said Sherry.

“The shopping spree was filled with fun and laughter, and definitely worth the long wait.

“We’re now huge fans of the H&M collaborations and can’t wait for the next one!”

Related Stories
Fans in other countries go as far as 'camping out' to get the new iPhone 6S
Crazy crowd at Stadium MRT Station after Jay Chou's concert
Should more counters be open at polyclinic for the elderly?
shopping
queue
long queue
H&M
crazy shopping
fun
crowd