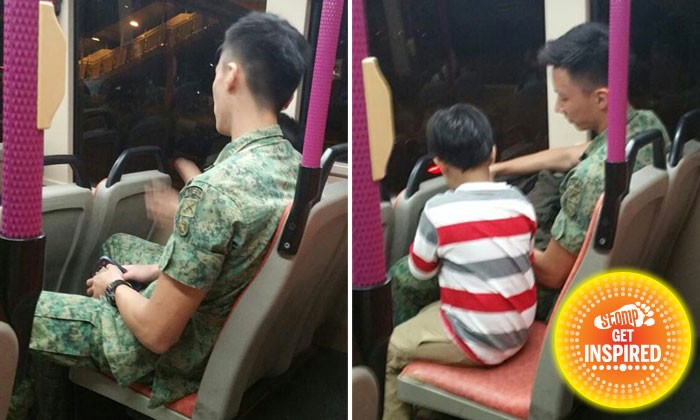 When we think of soldiers, we tend to have a mental picture of a valiant individual in green holding a rifle preparing to defend our country.

Behind their tough demeanour however lies a side of gentleness and compassion, as one SAF soldier has shown.

Twitter user @turtlebossy shared photos showing an SAF serviceman interacting with a boy on board a public bus.

According to the netizen, the boy first said to his mother "mummy look it's an army person" before going up to the soldier.

Not wanting to disappoint his new fan, the serviceman then had a conversation with the boy about Beyblade, a line of spinning top toys that was popular in the 2000s.

That's not all, the soldier also sang the Pokemon song with him.

We do not know much about this awesome serviceman, but based on the photo he also seems quite 'on the ball' in camp.

His uniform has an IPPT gold badge, a marksman badge, as well as a recon patch which signifies that he is trained for reconnaissance operations.

Mr kind-hearted soldier, we salute you for putting a smile on a young one's face!