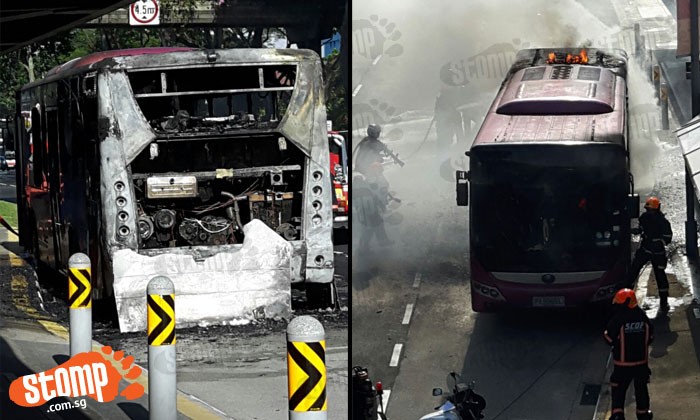 According to Noor, the bus was on its way back to Yishun bus interchange from Johor when the incident took place.

Stomper Lokesh, who lives next to the bus stop, had smelt the burning of rubber and decided to check out what was causing it downstairs.

He wanted to alert the SCDF when he saw the flames from afar, but before he could, they had already arrived at the scene.

“When I went down, I was happy to see that the SCDF had just arrived to put out the fire,” he said.

According to Lokesh, the passengers had already alighted the bus and had vacated the area by then.

"The scary part is Shell is just beside the bus stop. KUDOS to SCDF! Fast activate!" said Fadzlynah.

“A very good response from SCDF, I was doing some work from my home when I smelt something burning, I went down to check and the SCDF was already putting out the fire, so I’d definitely like to praise their good response,” said Lokesh.

An SCDF spokesperson provided Stomp with the following statement:

"It was extinguished by SCDF with two water jets.

"There was no reported injuries and the cause of fire is still under investigation."