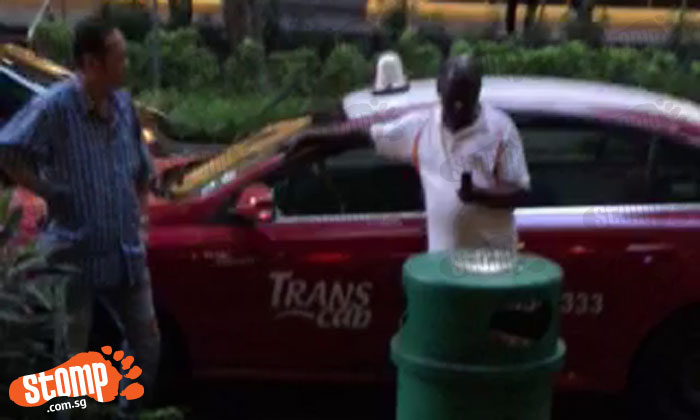 Stomper Thiagarajan was near Golden Shoe Hawker Centre on Market Street when he saw a cabby arguing with a passenger on September 13.

The two men were in the cab when he first saw them but the cabby soon got out to smoke while the passenger remained inside.

Then, when the cabby started talking to him, the passenger exited the vehicle to make some calls.

According to the Stomper, the passenger appeared drunk and had no money to pay his fare.

The Stomper spoke to the driver and advised him to call  the police.

As the cabby was dialing, the passenger pleaded him not to and made more phonecalls saying hie was calling his boss.

The cabby then got annoyed and asked the passenger, "if you don't have money then why did you take a cab?"

The man just showed the driver his wallet and bag that were empty and even asked Thiagarajan  for money.

The Stomper asked the cabby how much fare was due, and the taxi driver said the passenger had to pay $30.

However, by now, 15 minutes had passed and the cabby had enough.

So he threw the passenger's bag onto the sidewalk and drove off.

"I feel that the cabby deserves praise for remaining cool in such a situation, and that the passenger should not be wasting other people's time or money by doing such things."

Related Stories
Cabby restores woman's faith in humanity after refusing to accept payment knowing that her son is in hospital
Foreigner working in S'pore for 9 years on exceptional cabby: 'I've never experienced this much kindness'
More About:
cabby
dispute
taxi drivers
taxi