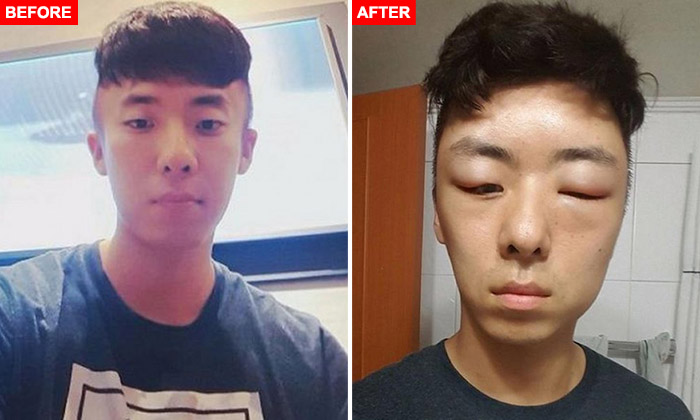 A Korean man recently left a hair salon with more than just a new hairdo.

After dyeing his hair, the young man's scalp started to get puffy.

Unperturbed, he returned home and went about his business as usual while the swelling worsened as the day went on.

When he woke up the next day, the man was shocked to find strange stains on his pillow case.

By then, his face was so swollen that he had trouble opening his eyes, and that was when he decided to seek medical attention.

In a series of self-portraits taken on his mobile phone, the young man documented the development of his hair dye allergy, as well as his face returning to normal after receiving treatment at the hospital.

Dangers of hair dye Hair dye may trigger an allergic reaction that leaves the scalp itchy, painful, and tender.

The condition may also affect the face, ears, and neck.

Although some people are able to colour their hair initially without any problems, it is possible for them to suddenly develop an allergic reaction to hair dye, the National Skin Centre (NSC) explains.

The substance that causes the adverse reactions is para-phenylenediamine (PPD) which is often found in permanent and semi-permanent hair dyes.

A severe allergic reaction to the chemical may cause a person to go into anaphylactic shock.

How to dye hair safely

Whether you're colouring your hair in a salon or at home, you should always perform a 'patch test' to see if you're allergic to the dye.

This involves dabbing a small amount of the dye solution to the skin behind your ear or on your inner elbow and leaving it to dry.

If your skin gets irritated during the test, do not use the hair dye, England's National Health Service (NHS) advises.

You should also check the ingredient list when selecting natural hair dye.

Although henna dyes are widely considered to be safer for use, some of them may contain PPD, says NHS.

Last year, a British teenager suffered severe burns on her skin after getting a temporary black henna tattoo on her leg.