#KittyCraze2.0: Netizens jack up prices for 7/11's 'limited edition' Hello Kitty EZ-Charms, some even start queuing at 2am! 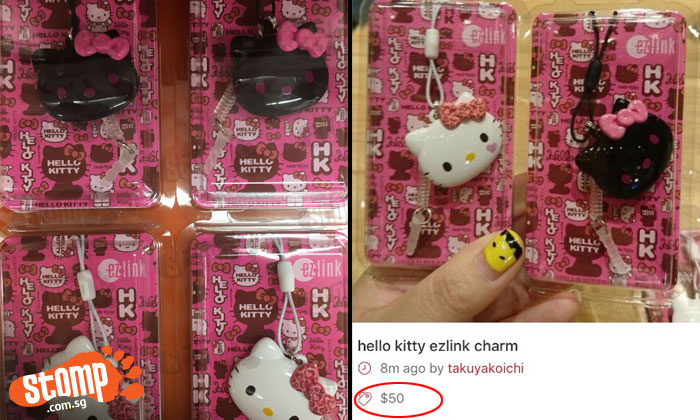 Looks like the Hello Kitty craze has hit Singapore yet again -- but this time in the form of 'limited edition' EZ-Charms.

The Hello-Kitty shaped charms were released at selected 7-Eleven stores around Singapore from 7am today (Dec 9), and of course, some started queuing early, while others turned this into a money-making business by reselling them online at higher prices.

According to 7-Eleven Singapore's Facebook page, the charms come in two designs: Black and White -- and retail at $24.90 per piece, limited to four charms per customer.

So what makes this charm so special? Not only does it act as dust cap for your phone, but it is essentially just like an EZ-Link card -- all you have to do is top it up and you will be able to use it for public transport.

But was it really worth queuing up at 2am? And is it really 'limited edition'?

Stomper C managed to purchase four of the EZ-Charms from the 7-Eleven outlet at Yishun Block 807 Yishun, at around 11.45am. She said she did not even have to queue as there were no other customers.

However, some netizens commented on 7-Eleven's page that the charms were already 'sold out' at slightly after 7am.

"Somemore your staff who work at Yishun Ring Road said that sold everything then the rest cant get is our problem and don't care about the rest?? Is this how your staff solves this problem?"

Another netizen even queued up at 2am just to get her hands on the charm.

"When I first went to 7-Eleven to check it out, I honestly thought there would be a queue, or that maybe everything had already been sold out since the release was at 7am at selected stores.

"But I just walked into the Yishun outlet at 11.45am and got four without having to queue! And it was super empty, no queues at all.

"I do not understand why some people started queuing at 2am!"

On top of that, resellers have also started jacking up the prices, with some approaching people on the Facebook thread, while others took to Carousell.

On the other hand, some netizens felt that close to $25 for an 'EZ-Link Card' was not very worth it.

What are your thoughts on this Hello Kitty craze episode?