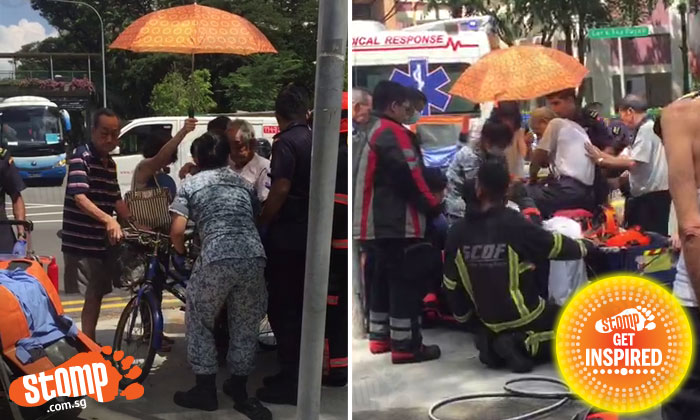 Stomper Lau Lup came across the aftermath of an accident believed to be involving a motorcycle and a bicycle along Lorong 8 on Thursday (Nov 17) at around 12pm.

The Stomper is unclear what caused the accident but reported that the foot of an elderly cyclist was stuck in the bicycle following the accident.

Photos and videos sent by the Stomper show SCDF personnel attempting to free the man.

Members of the public also played their part and aided rescue efforts.

In one of the photos, a woman can be seen shielding the elderly man from the sun with an umbrella.

A man clad in a grey-coloured shirt was supporting the cyclist by putting his arm on his back while SCDF personnel were working on the bicycle.

In one of the videos, a woman clad in an RSAF uniform can also be seen rendering aid to the cyclist while another elderly man was holding on to the bicycle preventing it from moving as rescue efforts were going on.

The man was eventually freed and taken away in an ambulance.

"The elderly man did not look to be in pain and there was no blood.

"I did not witness the accident but heard from passersby that it involved a motorcycle.

Kudos to those involved in helping the elderly cyclist!