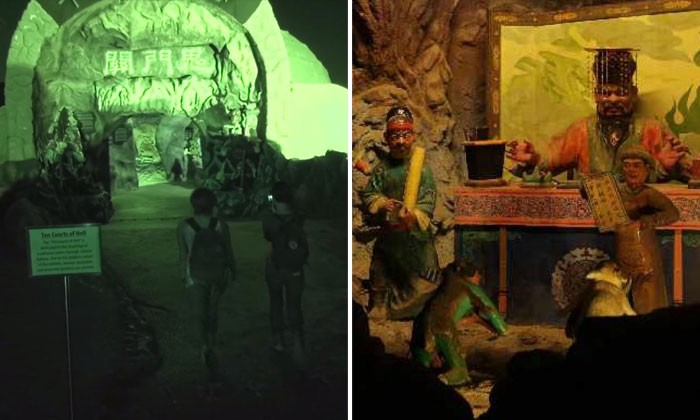 Nothing stands still at the dead of night.

Especially if you're braving the dark trails of Haw Par Villa minutes before midnight.

"If anything happens, keep the cameras rolling. The safe word is 'waffles' if you want out," SPH Razor multimedia producer Nessa Anwar briefed our motley crew of four before we tumbled out of the car and into a blanket of disquiet.

Whatever happened, we knew better than to breathe a single word associated with the paranormal.

SPH Razor and AsiaOne were on site at Haw Par Villa two months ago, a refurbished theme park which revolves around Chinese mythology and folklore.

The four of us were invited to take a walk in the park at night, to debunk two popular myths surrounding the old attraction. It didn't start well.

When we arrived at the park's main entrance around 11pm and launched into the first take of the night, one of our external camera lights began to flicker.

"This has never happened before," SPH Razor multimedia producer Isaac Netto muttered as he double checked the light settings.

"We just changed the batteries for all the equipment right before leaving office," Nessa told me. After a few frustrating minutes, we abandoned the flickering light completely and made do with a smaller video light.

Our nerves were jangled by that "brief welcome", but it turned out to be a prelude to stranger things to come.

Haw Par Villa is home to over 1,000 intricately hand-painted sculptures inspired by a confluence of Buddhism, Taoism and Chinese folklores and values.

While the larger-than-life exhibits were built for an educational purpose, many Singaporeans grew up believing that the statues will come alive and berate you if you were not virtuous enough.

It doesn't help that our parents probably found this an effective way to school us in etiquette lessons, and so the myth propagated.

We ventured into one of the darkest reaches of the park, where the Journey to the West exhibition stands.

The minute we started setting up the tripods, one of our camcorders which was left unattended on a bench, started to behave oddly.

The camcorder's flash flickered on and off without anyone touching the device. To be clear, the flash will only be activated when the user presses and holds onto a small button on the camcorder.

Undaunted, Nessa picked up the misbehaving camcorder and the flickering stopped immediately.

We were unnerved for sure, but we had to barrel through the job. Nessa and I then took our positions on two separate benches about 10m apart and sat alone for 15 minutes, facing the exhibits.

In that brief 15 minutes of silence and isolation, the softest of sounds were amplified.

While no statue came alive during our isolation, our senses were certainly heightened; Nessa spun wildly around when something unseen brushed against her neck, but I came out of it unscathed.

When we reviewed footage, we also noticed glowing orbs of light in the video. Whether or not they were formed by the disturbance of the camcorder's infrared lights or something more sinister, we couldn't be sure.

Popular Myth 2: 10 Courts of Hell is the actual portal to hell

The exhibit is modelled after the Chinese belief that there are 10 courts of hell in the afterlife.

Each level of hell has its own unique form of punishment for various categories of criminals. Conmen and robbers will be thrown into a fiery pit while rapists and murderers will get their limbs sawn off. Prisoners will then be sent to the 10th court of hell to receive their final judgement and thereafter be reincarnated as a human or an animal.

The sculptors obviously made it a point to drive home the message. Haw Par Villa's most famous exhibition is filled with graphic scenes of bloody and decapitated figurines undergoing various gruesome tortures.

The gory scenes did nothing to dispel the myth that the exhibition is a gateway to hell itself.

Clearly the "portal" didn't suck us in. But we found ourselves once again dealing with technology glitches.

It was slightly past midnight when we entered the exhibit to set up the cameras.

Nessa and I had made sure that the camcorder was set to recording mode before speaking in front of it.

Then Isaac came over with a strange look.

"The camera isn't even switched on," he said, toggling with the camcorder and setting it right again.

We could brush it off as mere coincidence or human error if the glitch happened once. But it was the third time that night where perfectly functioning equipment acted strangely.

Speaking to the night security guard affirmed our suspicions that there was more to the park than just a tourist attraction.

The guard, who doesn't wish to be named, told us that he was the only security personnel on patrol at night. He was only a month into the job, but has already gotten used to paranormal encounters.

"After a while, you learn to make friends here," he smiled wanly and returned to his post.

The Haw Par Villa of today may be shrouded in mystery, but its origins are far more innocuous than sinister.

Chinese-Myanmar tycoon Aw Boon Haw built a villa on the highest point of Pasir Panjang Hill as a tribute to younger brother Boon Par in 1937.

He commissioned a team of talented craftsmen to fill the expansive grounds with sculptures depicting Chinese folklore and values.

The park was first named Tiger Balm Gardens, after the brothers' signature product and comprised of the family's villa on the uppermost tier of the terraced hill and the sculpture garden on the lower tiers.

Over the years, the villa was demolished and replaced by the expanding sculpture garden. The park also changed hands several times and is now managed by a new operator, Journeys.

Regardless of the number of renovations, the 79-year-old theme park is still plagued by rumours of malevolent spirits and wandering spectres.

No statues came alive and no gate to hell materialised that night, but the chilling aura surrounding Haw Par Villa is part of the allure that continues to charm visitors.

Related Stories
Two-sentence horror stories that you should not read when you are alone
Unsolved mysteries from the past that will send chills down your spine
Stomper 'scared to death' after seeing tall shadowy figure at Bukit Batok HDB block
Driver spots spooky floating figure on PIE
More About:
creepy
scary