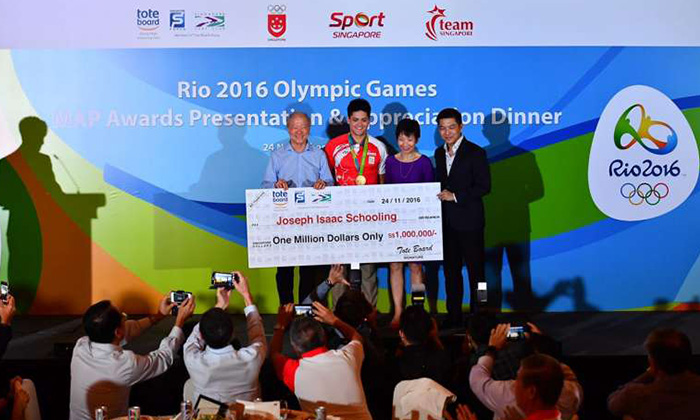 The 21-year-old will give 20 per cent of that amount to the Singapore Swimming Association for its training and development schemes, as stipulated by the SNOC.

He was presented with the cheque by Tote Board chairman Moses Lee, together with guest of honour SNOC president Tan Chuan-Jin and Minister for Culture, Community and Youth Grace Fu at the Mandarin Oriental Hotel.

Said Schooling: "It's great support from (the Tote Board); I don't think a lot of people will offer that much money to people that easily and that just goes to show how genuine they are and how invested they are in the sporting scene in Singapore, and that's really sweet."

Paying tribute to the 2016 Olympians, Mr Tan, who is also Minister for Social and Family Development, said: "I had the privilege to be in Rio to support our athletes and officials and to witness the tenacity of our athletes as they put in their best efforts to compete against the best in the world.

The MAP rewards medallists of the SEA, Commonwealth, Asian and Olympic Games, and is sponsored by the Tote Board family comprising Tote Board, Singapore Pools and Singapore Turf Club.

Schooling set a new Olympic record of 50.39 seconds en route to winning the 100m butterfly final in Brazil in August, nearly one second ahead of a joint-silver finish of 51.15sec shared by 23-time Olympic champion Michael Phelps of the USA, South Africa's Chad le Clos and Hungary's Laszlo Cseh.