Joseph Schooling has many female friends, says his mum about GF rumours 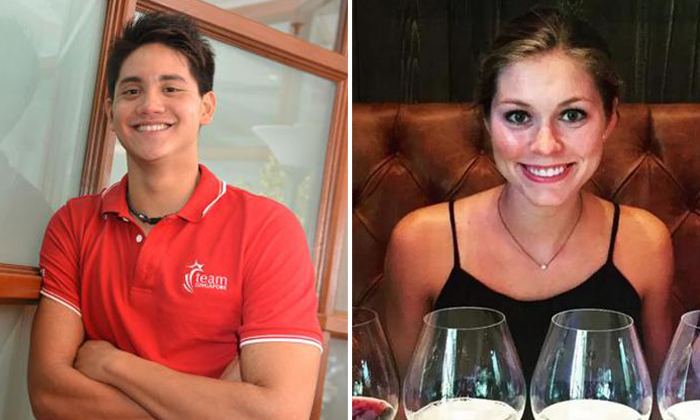 Mrs May Schooling, mother of Singapore swim star Joseph Schooling, reiterated that her son has "many female friends", in response to speculation over whether the 21-year-old Olympic champion has a girlfriend.

The 60-year-old was speaking to The Straits Times at a press event on Thursday (Aug 25).

Schooling has been in the spotlight since his sensational triumph in the 100m butterfly at the recent Olympic Games in Rio and all aspects of his life, including his purported romantic liaisons, have been heavily scrutinised.

A user on dating app Tinder had even claimed she was matched with Schooling before the Olympics.

More recently, Ms Casey Shomaker, an American who is reportedly studying for a doctorate in law at the University of Texas, who has been linked with him, posted a photo on Instagram of the both of them at the airport upon his return to the United States last week.

They posed with a sign that read "Joe Schooling, Olympic Champion".

Ms Shomaker captioned the photo: "So good to have this one back! Thanks for taking care of him, Singapore!"

But Mrs Schooling said her son was welcomed at the airport in Texas by "one of his friends", adding: "And let me tell you, I'm happy he has female friends, if he doesn't, I'll be worried. He has many female friends."

Schooling, 21, is resuming his training and studies at the University of Texas in Austin after winning Singapore's first gold medal at the Olympic Games.

He had an event-filled homecoming after he arrived in Singapore, just two days after edging out American legend Michael Phelps and reigning 100m butterfly world champion Chad le Clos to win the Olympic 100m fly final.

He then made an appearance in Parliament, where he was formally congratulated by the House for his achievements. He also received news that his national service deferment will be extended till after the Tokyo 2020 Olympics.

He also visited his alma mater, Anglo-Chinese School (Junior) at Winstedt Road, where 1,607 pupils gave him a rousing reception.

An open-top bus parade in his honour on August 18 rounded off the four-day celebrations. Schooling returned to the US on Friday, August 19.

Related Stories
Crowds cheer as Joseph Schooling goes on victory parade around Singapore
Men chant his name, girls scream for him and one air stewardess even calls him handsome
When boy Schooling becomes a hero...
More About:
Joseph Schooling
olympics
talent