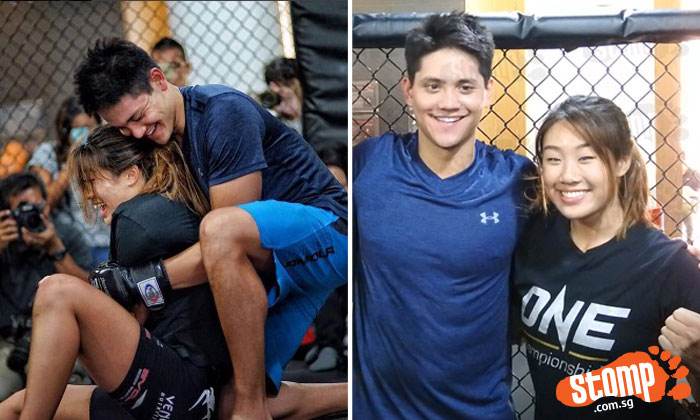 It was a clash of the titans this afternoon as Singapore's Olympic gold medallist took on ONE FC's Women's Atomweight Champion in an MMA cage.

This unique event organised by ONE Championship saw Angela Lee, 20, and her brother, Christian, 17, imparting their skills in fighting to Singapore's Olympic gold medallist.

The one-of-a-kind MMA seminar saw the duo conducting a mini 'fight-camp' for Schooling where they taught him some basic moves in striking, grappling and submission through a serious of demonstrations.

Christian coached Schooling's friend 'Tripp' while his sister served as mentor to the 'King of the Butterfly'.

So, as a fish out of the water, how did Schooling fare?

He had no trouble with the punches and kicks. When it came to grappling and submission however, 21-year-old required a little more coaching from the reining Women's Atomweight Champion.

At the end of the 20-minute training session Schooling managed to smoothly perform a take-down and a rear-naked choke on his MMA counterpart which are rather complex moves for someone with no fighting experience.

Following the seminar, both athletes responded to questions about their respective sports as well as their personal lives.

Have a look at what they did in the video below.