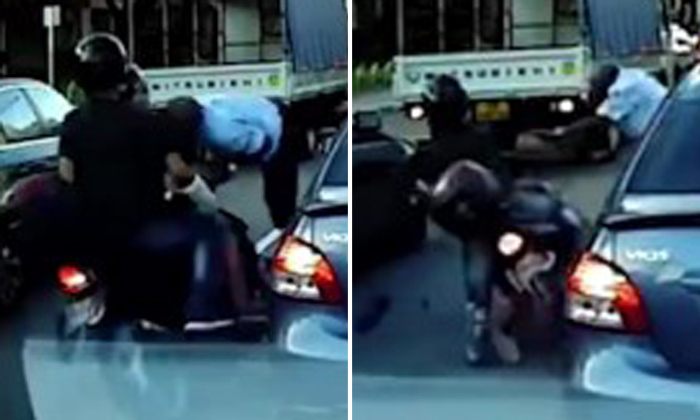 A jaywalker was sent flying after a motorcycle crashed into him when he dashed across the street at Serangoon Road.

The incident occurred at 6.35pm on July 8, near the Sri Srinivasa Perumal Temple.

Car-cam footage shows a man dashing across the road when cars come to a halt due to a jam.

The man fails to spot a motorcycle approaching between the other vehicles.

The motorbike crashes into him, sending him flying.

The accident also sent the motorcyclist and his pillion rider crashing to the road, knocking a car's left side-view mirror casing off along the way.

The driver, Leonard Chan, posted on facebook that he came out to check on the rider, pillion and the elderly man who was jaywalking before calling the ambulance.

Leonard added that the jaywalker had left shortly after, so he had to call back to cancel the ambulance.

The motorcyclist also said he was alright, so Leonard left the area as well.

Later, he received a call from the traffic police so he made his way to the accident scene to speak with the officers and affected motorcyclist before lodging a police report.

Leonard also explained that the traffic police advised him that all affected parties should stay at the accident scene to assist with investigations.

He stated that the old man was brought to the hospital in an ambulance later as his injuries were more serious than they appeared at first.

"The motorcyclist was very angry with the jaywalker, because he was inconsiderate for appearing out of nowhere and crossing the busy road," said Leonard in his post.

"He has a full-time job, a part time job as a rider and he was really upset that his bike fell on him - not only affecting his health but his sideline job.

"I'm sure any rider would be frustrated with jaywalkers, as you whisk down the road between cars."

A clip of the accident, credited to J Chong, was posted on Roads.sg.