Is WTF acceptable in everyday conversation? Eatery sparks furore over responses to customer who allegedly used phrase on staff 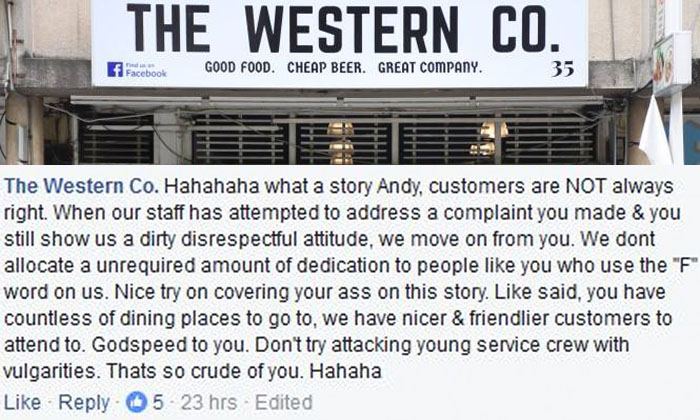 Is the phrase 'what the f***' (WTF) acceptable in everyday conversation, or is it offensive?

That is the question a recent dispute between an eatery and a diner has raised among Singaporeans.

The Western Co is on the receiving end of public backlash after it sent what netizens perceived to be sarcastic responses to a customer who ranted about the poor service he allegedly received there.

Facebook user Andy Wong said that he made a reservation at The Western Co and received a text message saying only NETS payment is accepted, which he assumed was a typo.

So he went there with his friends, assuming that both cash and NETS payments were accepted, and did not bring any cash along.

After getting the group's orders, Andy proceeded to the counter to pay, but was told that only cash payments were accepted by the female staff member.

He detailed that even after showing the text message he received, he was told that only cash payments were accepted.

The Western Co says that Andy said "what the f***" to the counter staff member, but Andy insists that he did not do so.

So he proceeded back to his table to explain the situation to his friends while grumbling and complaining to them.

One of his friends who had cash offered to pay first.

But Andy says that the woman from the counter was standing behind him at this point, and asked what he was so unhappy about as it was only a NETS issue.

Andy responded by asking if, as a customer, he was not allowed to be unhappy about things.

To his surprise, he was supposedly told by the woman that if he was unhappy he did not have to eat there and could leave.

She also allegedly told him, "We are all educated people. We don't owe you a living."

Andy also says that she repeat that they don't owe him a living multiple times.

At this point, the woman's male colleague came to ask what the situation was about, and asked the group if they had cash with them.

However, the woman allegedly insisted that they did not have to serve the group Andy was with.

When one of Andy's friends said that some of them had ordered and paid for some dishes which had yet to be served.

The woman reportedly responded by asking her male colleague to give Andy's group a refund, and asking them to leave.

Despite his friends attempt to calm the situation down, Andy says the woman still chased them out of the eatery.

However, this dispute did not end when Andy and his friends left The Western Co.

However, The Western Co responded to his post by saying that he did use vulgarities on their staff member, and that he was just trying to cover himself with his rant.

The eatery also told Andy that it did not need business from customers like him.

It then became a case of he said, she said as both The Western Co and Andy stuck to their version of the incident.

Netizens, however, were not kind in their reception of The Western Co's response.

Slamming The Western Co's response to Andy, netizens pointed out that it was a very bad attempt at public relations by the eatery.

Thought they agreed that the customer is not always right, they also highlighted that if the eatery was unable to take criticism, it should not be in the food and beverage line.

Some even said that telling customers it did not need their business was not particularly wise for an eatery.

Many also posted screenshots of their own encounters when they received similar responses or saw similar replies from The Western Co to other customers' complaints.

But of course, this brings up another important topic: Is WTF an acceptable phrase in today's daily conversations?

It is a phrase commonly used by people today in daily conversation, and is not taken as offensively as when the word f*** is used directly.

The urban dictionary explanation for the phrase is that it used to explain something that does not make sense or is outrageous.

Which begs the question, should someone be offended when this phrase is used?

Is it a case of a curse word that is offensive becoming a norm, thus the restaurant is right to react as such?

Or should the customer be given the benefit of using such a phrase because of the situation he was faced with?