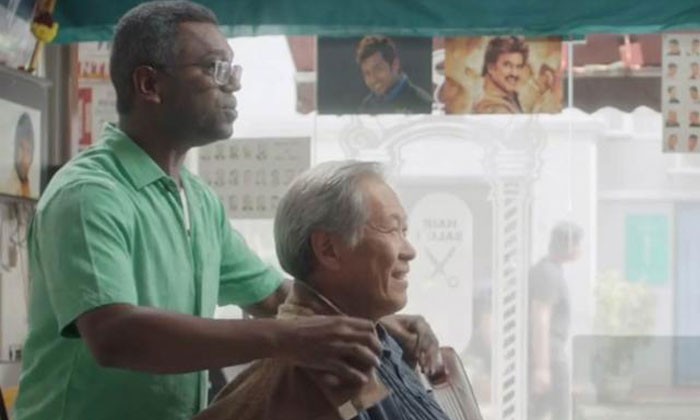 If you ever wondered who Defence Minister Ng Eng Hen sees when he needs a haircut, it's a neighbourhood barber named Siva who adores Indian film stars like Rajinikanth and Abhishek Bachchan.

But Mr Ng did star as a regular customer of a barber in a short film entitled "The Usual", appearing after the credits in a cameo appearance.

The film was written and directed by Sanif Olek, and was one of two films commissioned for this year's ciNE65 short film competition, which is back for a new season.

In the film, Mr Ng calmly walks into the barber shop, flashes his pearly whites and drops his lines like it's hot: "I'll just have the usual".

Quite a convincing performance by Mr Ng, most would agree, despite it lasting only a few seconds.

He may not be up for an Oscar anytime soon, but he certainly boosted the 4-minute film's novelty factor, considering the rarity or unheard-of notion of Singapore ministers popping up in locally-made films.

Facebook user Marsie Aiko posted: "Brilliant video…and even minister of defence is in it."

The storyline's as heartland as it gets, centred on the life of a boy named Rosli who aspires to be a commando after seeing a picture at the barber shop.

It has an extra emotional tug complete with flashbacks, when Rosli and Siva start reminiscing the past before Rosli's father died. It was after all Rosli's father who first brought him to Siva's shop.