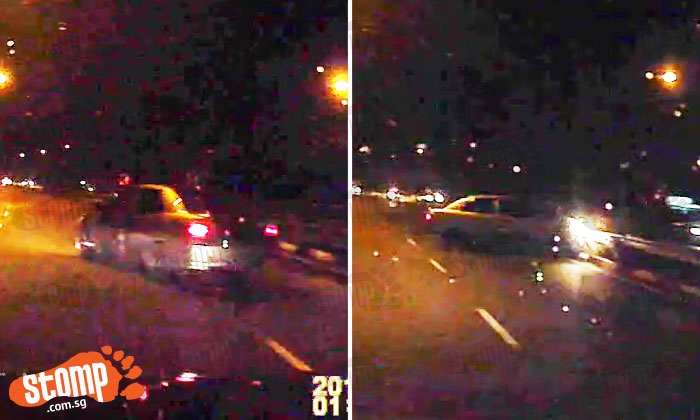 Stomper Nate came across an accident involving a car on the KPE near the Buangkok exit three days ago (Jul 26) at around 1.17am.

In an email to Stomp, the Stomper said that the driver was driving his vehicle at a road bend at a speed of around 80 to 90km/h.

According to the LTA, the speed limit for the vehicles on the KPE is 80km/h.

He described what happened in an email to Stomp:

"I then saw a vehicle approaching from behind at about 80 to 90km/h.

"I kept slightly to my left to let the driver pass.

"However, he entered the bend too quickly and the car skidded and crashed into a road divider at the centre of the road.

"The car was badly damaged from the crash.

"It's bumper and car plate was missing. Shards from the headlights were all over the floor.

"The driver was not badly injured, but his passenger on his left looked to be in pain.

Nate also sent Stomp a video of the accident captured by his dashboard camera.