Imagine getting greeted at a hotel lobby -- by dinosaurs 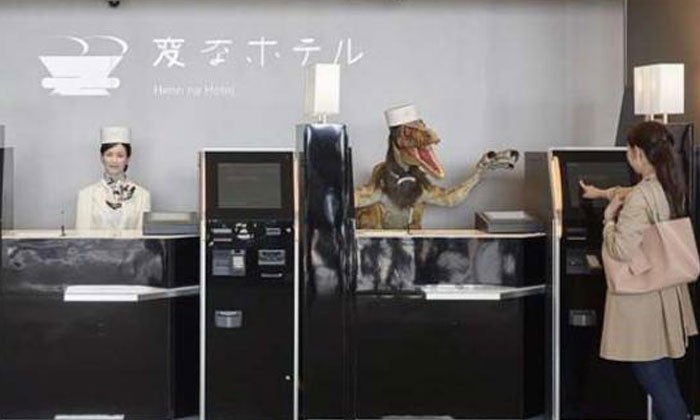 Do not be alarmed when a dinosaur receptionist checks you in for your stay at the Henn Na hotel in Sasebo, Nagasaki.

Literally translated as "Weird Hotel", this hotel has been living up to its name by being the first in the world to be staffed almost entirely by robots.

Since its opening in July 2015, the hotel has been praised by guests for its impressive technology, reported Japanese newspaper, Stripes Japan.

According to Japan website Newswitch, this futuristic technology enables Henn Na hotel to be manned by only three human staff. This is a stark difference from the 30 personnel they had previously.

Today, the hotel has had so much success that two other hotels are in the process of being built in Japan and are set to open in the first half of 2017.

Newswitch added that Henn Na hotel might even be venturing into Bali, Indonesia when they gather enough interest there for such a hotel.

And why not? It is an experience unlike any other.

According to Stripes Japan, guests are usually greeted by Chu-ri, a pink stuffed robot when they first enter the hotel lobby.

Three other robots await them at the reception: A dead-eyed woman and two Jurassic Park-esque velociraptors.

And as you approach these bizarre robots, they animatedly welcome you in English, Japanese and Korean.

The only upset in the whole process is when a human staff comes out to check your passport for security purposes. Unfortunately, security and cleaning are two important jobs that cannot be delegated to the robots.

However, the hotel makes up for that with other interesting futuristic features like a face-recognition door-locking system, sensors that adjust the room temperature according to your body heat as well as a mini Chu-ri that controls the lights and answers simple questions.