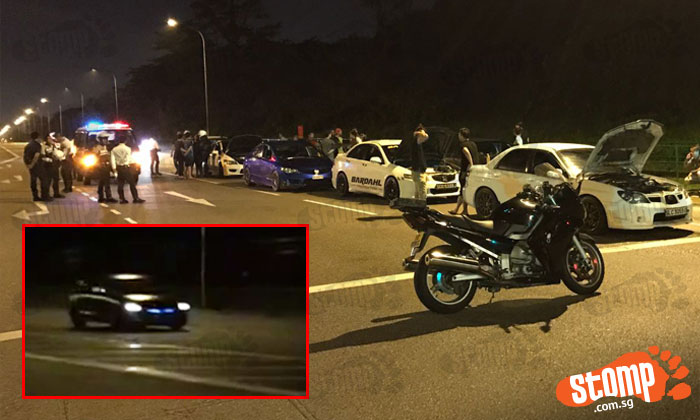 The Traffic Police has arrested two men in connection with a suspected illegal race that took place along Lim Chu Kang Road this morning (Dec 9) at around 1am.

"The Traffic Police has arrested two men aged 23 and 34 for their suspected involvement in dangerous driving on December 9 along Lim Chu Kang Road.

"The Traffic Police takes a stern view on such dangerous road behaviour as it puts the lives of drivers and other road users at risk.

"Such errant motorists will be taken to task and can be expected to be dealt with to the full extent of the law.

A Stomper received a video and photos on WhatsApp showing alleged illegal racers getting caught by Traffic Police officers along Lim Chu Kang Road this morning (Dec 9) at around 1am.

In a WhatsApp message to Stomp, the Stomper said that the racers were ambushed before getting apprehended by the enforcement officers.

A group of people, possibly drivers, can be seen talking to a an officer wearing a helmet.

The Stomper also sent a video showing two cars travelling at a high speed along the road in front of several onlookers.

Other cars can be seen parked by the side of the road.

"It is good that the Police are taking action about this kind of activity."