I regret being so careless, says hot-spot resident after her son got dengue 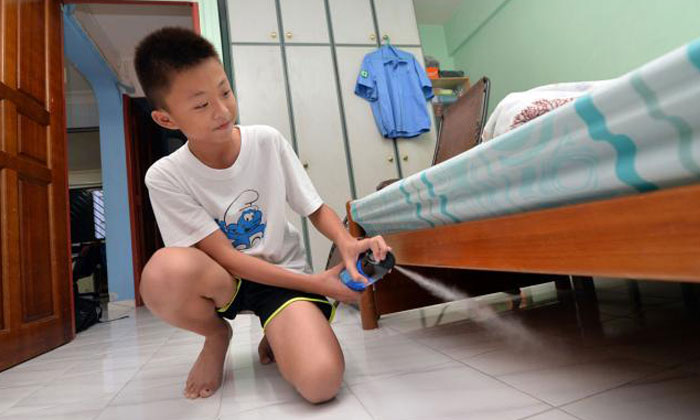 She received a WhatsApp message from her friend on Wednesday last week informing her of the number of dengue cases in her neighbourhood.

The next day, one of her three sons had an unusually high fever and was later diagnosed with dengue.

The 47-year-old housewife, Ms Ivy Tan, told The New Paper in Mandarin on Wednesday: "I really didn't expect my own son to have dengue...

"I regret being so careless."

TNP visited two active dengue hot spots - Yishun Avenue 4 and Admiralty Drive - and found a number of households taking extra precautions to make sure dengue does not spread to them.

NEA considers both areas as red-zoned hot spots, which are high-risk areas with 10 or more dengue cases.

Yishun Avenue 4 has had 11 dengue cases since the start of the cluster while Admiralty Drive has had 67 cases.

Last Thursday, Zhengda had rashes and a high fever that hovered around 39 deg C.

Ms Tan took him to Yishun Polyclinic and was told by the doctors that he had flu.

However, he was in so much discomfort that she insisted the doctor do a blood test.

"His condition wasn't getting better and I needed to know exactly what the problem was.

"The worst part was that none of us suspected it was dengue, he didn't complain of mosquito bites - it just hits you when you least expect it to.

"I think this is a good lesson learnt because we are now more conscious of dengue and what it can do," she said.

Ms Tan even moved Zhengda out of his elder brother's bedroom, where he usually sleeps, and into her bedroom for five nights.

Zhengda has recovered and is back in school.

The family also bought two cans of insecticide and has been spraying often in dark corners of the flat.

She said: "We don't want to risk the same thing happening again...

"I could tell that my son was very uncomfortable from the pain."

Ms Tan hopes her dreadful experience with dengue will be a lesson to others.

She said: "Dengue is a lot more dangerous than we think, and we shouldn't be taking the tiny mosquito lightly.

"Everyone needs to play his part so that nobody gets hurt."

Her neighbour, Ms Vanda Sethi, 45, a private tutor, is also not taking any chances.

She said: "I've heard of people who die of dengue so... I don't want anyone in my family to risk getting dengue."

Another resident in the block, retiree Alice Chua, 69, has been making sure that the rims and surrounding areas of her flower pots are dry.

She said: "I am a little bit worried... but as long as I keep my flat clean, it will be okay."

However, some residents did not seem too concerned.

A designer in his 20s living in Block 467, Admiralty Drive, who wanted to be known only as Benjamin, said: "I'm not too worried since I'm generally healthy.

"If I eat healthy and exercise, I can recover quickly - all will be okay."

Seven people have died of dengue this year, up from four cases last year.

The latest was a 79-year-old Singaporean man who lived in Eastwood Drive, off Bedok Road.

So far this year, the number of dengue cases in Singapore has hit 10,101.

This compares with 11,286 cases for the whole of last year.

According to a dengue awareness website by the National Environment Agency (NEA), the numbers are expected to increase in the coming months.

An update on the NEA website said: "As we are in the traditional peak dengue season, we are anticipating an upward trend in the number of dengue cases in the coming months.

"Since April, NEA's Gravitraps data has shown a steady increase in the Aedes aegypti mosquito population in our community and remains high."

There were 222 dengue cases in the week ending July 30.

This makes it the sixth week in a row that there were more than 200 reported dengue cases in a week.

Both dengue and the zika virus are spread by the Aedes aegypti mosquito, which is easily identified by its black and white stripes.

He said: "Once you break the breeding cycle, you break a transmission cycle.

"When you kill the bug, you kill dengue as well."

Seven people have died of dengue this year. Five of them lived in active dengue hot spots.

He lived in Eastwood Drive, which is an active cluster, with nine cases in the past two weeks. He was admitted to Mount Elizabeth Novena Hospital on July 30 and died on Thursday.

She lived in Simei Street 1, which was a two-case dengue cluster. She spent three days in Changi General Hospital (CGH) before dying from dengue.

He lived in Jalan Tenaga in Eunos. The area was an active dengue cluster and had six cases of dengue.

She lived in Poh Huat Road West, which is near Kovan MRT station. At that time, Kovan was an active four-case dengue cluster. She was admitted to Tan Tock Seng Hospital (TTSH) on March 22 and died two days later.

She was living in Bedok North Street 3, which was not an active dengue cluster.

He was admitted to TTSH on Feb 8 and was living in Toa Payoh Lorong 4. It was not an active dengue cluster.

He is the youngest person to die of dengue this year. He was living in Marsiling Rise, which was an active 10-case dengue cluster.