'I never got to see him alive': Dad of boy who died from abuse by pregnant mum and her BF 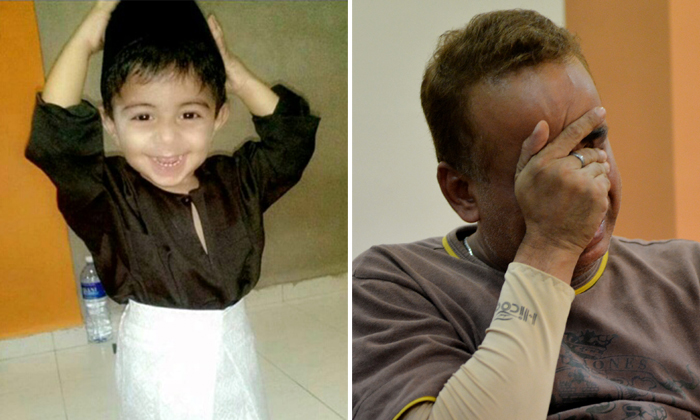 He was in prison when his son was born.

Day after day, he counted down the days to when he could hold his boy in his arms.

But when Mr Mohamad Nasser Abdul Gani could finally do that, it was too late.

The only time he got to hold Mohamad Daniel Mohamad Nasser was when he was about to bury him.

His son died on Nov 23 last year, about a month before his third birthday, after 25 days of sustained abuse by his mother, Zaidah, 41, and her live-in boyfriend, Zaini Jamari, 46.

Choking back tears, Mr Nasser, 41, told The New Paper yesterday: "I never got to see him alive. The only time I held him in my arms, he was a lifeless corpse."

He said he had spent 18 months behind bars from December 2012 to June 2014 for drug-related offences.

Two months before he went in, Mr Nasser was informed by Zaidah, whom he had married in Batam and later divorced, that she was pregnant with his child.

A few weeks into his sentence, Mr Nasser said an officer asked him to sign a document, which informed him that he was the father to a boy named Daniel.

This gave him something to look forward to after serving his time.

"I told myself that I would find my son after I got out," said Mr Nasser, who works as a cleaner.

But after his release, he found out that Zaidah was no longer living at her old address.

Making it his top priority to find Daniel, Mr Nasser reached out to Zaidah's friends, tried all possible phone numbers he could think of and even visited places he thought she might frequent.

A year of searching yielded no results. None of his friends or acquaintances knew where Zaidah and Daniel were.

Frustrated by each failed attempt to find his boy, he started losing hope of ever meeting Daniel.

Mr Nasser, who has two older children from a previous marriage, said: "I was not even given a chance to meet my own son.

"I did everything I could, but they could not be found anywhere. I thought that I would never see or hear about Daniel ever again."

About five months later, on the evening of Nov 26 last year, he finally got news about his son. It was a call from a police officer, who asked if he had a son named Daniel.

Mr Nasser excitedly said yes, thinking that after more than two years, they would finally get to meet. But what he thought was good news brought his world crashing down.

The officer told him the heartbreaking news that Daniel had died after being abused.

"I did not even get to see Daniel alive, and now they called me to identify his dead body," Mr Nasser said.

Putting aside his anguish, Mr Nasser went to the mortuary the next day and saw his son for the first time.

It left him in tears.

"There were cuts and bruises everywhere on his tiny body," he said.

"It broke my heart to look at him, my own flesh and blood, knowing that he had been hurt and tortured so badly."

It was to be the first and last day that he would get to hold his son.

That same afternoon, he and seven of his family members buried Daniel.

His brother, Mr Abdu Manaf Al Ansari, said that though they did not get to know Daniel, the family loved him and wanted to make sure he was given the proper last rites.

"We are the paternal side that Daniel could have grown up with," he told The New Paper.

"Daniel was not an outcast, not from a broken family. He had a good family, only that he was denied true love from us."

"I would have given anything for the opportunity to take care of him."

Mohamad Daniel Mohamad Nasser, who died about a month short of his third birthday, was abused for 25 days over a 35-day period.

During that time, he was kicked and slapped almost every day by his pregnant mother and her boyfriend.

Cleaners Zaidah, 41, and Zaini Jamari, 46, also made Daniel stand with his hands on his head while wearing only a diaper as punishment.

They also forced him to eat spoonfuls of dried chilli.

He was found motionless on Nov 23, 2015, the morning after he fell and hit his head on the floor when Zaini kicked him.

An autopsy found that the cause of death was bleeding in the brain.

Last Thursday, Zaidah and Zaini were each convicted of three charges of child abuse and one count each of causing grievous hurt.

Zaidah admitted to 26 other charges of abusing Daniel, and Zaini to another 18 counts.

The couple will be sentenced next Tuesday.