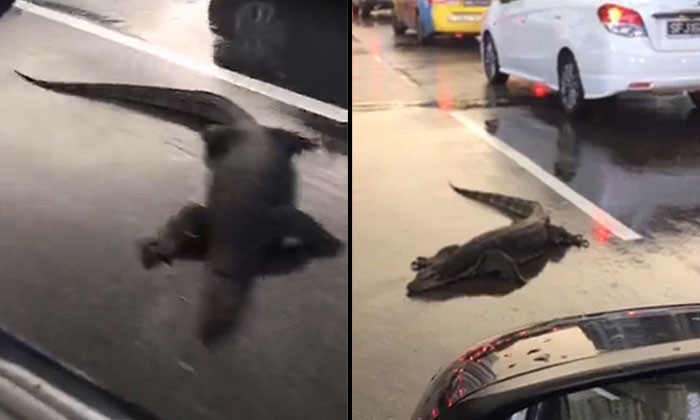 A Stomper alerted Stomp to a video circulating online showing a monitor lizard in the middle of a busy road in Buangkok.

A netizen recorded a live video of the large reptile on his Facebook page at around 6pm yesterday (Feb 3).

In the video, the lizard can be seen motionless on the second lane of the road.

There were several vehicles around it.

According to The Straits Times, the presence of the reptile caused a minor traffic jam.

Drivers had to slow down their vehicles to avoid running over the creature.

A driver said that the monitor lizard had moved to the side of the road when he left the area.

It was however killed later on after getting hit by a car, reported Roads.sg.

"Water monitor lizards are commonly found throughout the island.

"Unfortunately, because we are heavily urbanised, wild animals often get stranded, and in this case, fall victims to traffic accidents."

Related Stories
My my, look how huge this monitor lizard at park near Khoo Teck Puat Hospital is!
Monitor lizards and otters all come out to play on a fine day in Sengkang
monitor lizard
creature
unusual
bizarre
lizard
reptile
accident
death
tragic