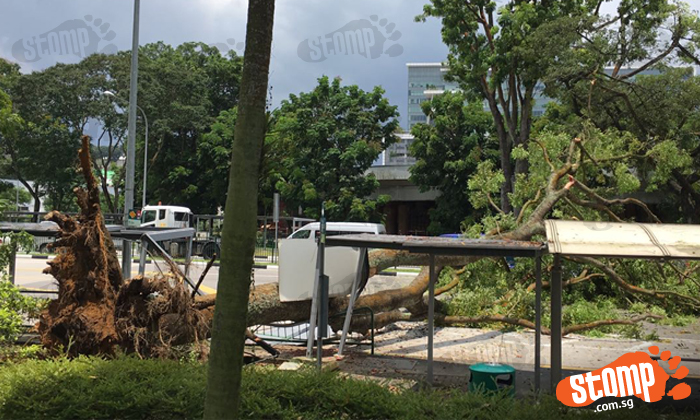 A fallen tree left quite a trail of destruction in its wake at around 1.15pm yesterday (Apr 15), near the Singapore Discovery Centre along Upper Jurong Road.

Stomper Aoshima was at the scene and sent in photos of the damage.

In a phone interview, he told Stomp that the uprooted tree had "completely damaged" a sheltered walkway in the area.

Besides having crashed through the sheltered walkway, the 17-metre tree also landed right on a car and hit a bus stop.

"Was walking around Arena Country Club and saw this.

"The tree fell right in front of the main road of the Singapore Discovery Centre.

"It hit a car too but I'm not sure if the driver was in the area."

The Stomper added that he did not see anyone injured.

When he revisited the scene at around noon today (Apr 16), the tree had already been cleared away (Photos #15 onwards).

This is just one of many reports about fallen trees causing significant destruction that Stomp has received.

Earlier in February this year, a woman was killed and four other were left injured by a fallen tree in the Botanic Gardens. Just three days later, another female was seriously hurt in a similar incident at Yuan Ching Road.