How would you react if you found these in your kid's meal? 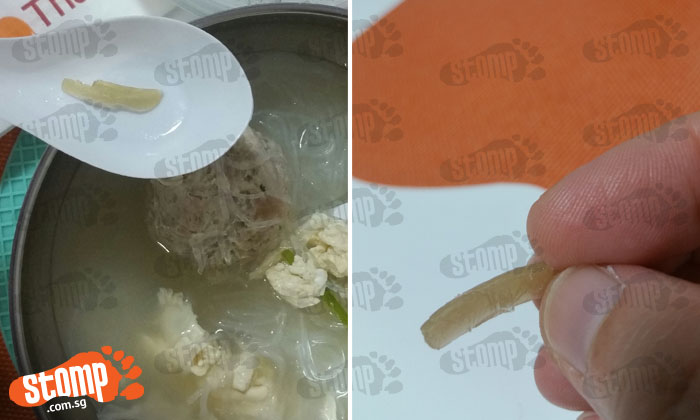 A mother was appalled to find two foreign objects in her son's food last month.

Stomper Wee and her son were eating at Thai Express at Clementi Mall on Nov 23 when she noticed something was not right.

She said that her son looked at her strangely while eating his Glass Noodle Chicken Tang Hoon Ball in Soup dish and when she asked what was wrong he didn't answer.

Her motherly instincts kicked in and she asked her son to spit out his food.

She then found a two-centimetre long object in one of the meatballs.

While she was inspecting it, her son spit out another piece, this time about 1.5-centimetres long.

After hearing  about what happened, one of the staff apologised and she said she would asked her manager to call me."

However, nobody called her till around 9pm the next day when Wee received a missed call.

When she WhatsApped the number she found out it was the manager and asked her to call back tomorrow.

She received another missed call the next day but was not sure if it was the manager.

However, she has not received any more calls after that till now.

"I really think that they need to be more responsible towards this issue. It is a kid's meal!"