How on earth did taxi end up in Bukit Timah condo swimming pool? 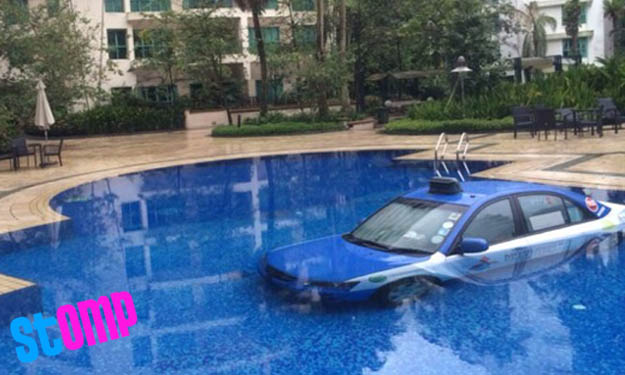 A taxi ended up in the swimming pool of a Bukit Timah condominium in the early hours of this morning (Nov 10).

STOMPer Saiful and his friends noticed the cab when they looked out of the window of a condo unit.

The STOMPer says it was raining heavily at the time.

"Taxi in a swimming pool.

"Taxi drives into a condo swimming pool in Bukit Timah.

"My friends and I were partying at a friend's condo at Bukit Timah.

"It was raining heavily and we decided to call a cab, but we couldn't get one.

"When we looked out of the balcony, we saw a cab below, and later realized it was in the pool.

"We went down to take a closer look, but didn't see the driver.

"It happened at around 3am this morning."

Another STOMPer who saw the taxi in the pool sent in a report with pictures of his sighting.

"I live in Southaven II. When I woke up earlier this morning (Nov 10), I saw the taxi in the pool of a condominium.

"I'm not sure what happened though."