How on earth did it end up there? SMRT bendy bus gets stuck on field at Kim Keat Avenue 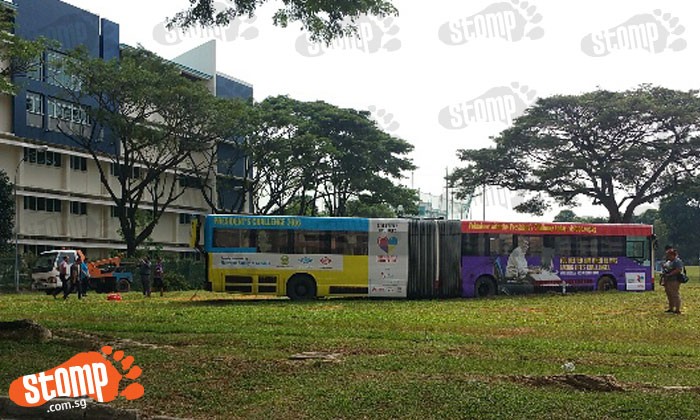 Stomper Victor saw an SMRT bendy bus in the most unlikely of places this morning (Sep 29): On a field near Block 195, Kim Keat Avenue.

According to him, a resident said that the bus had been stuck there since midnight for over ten hours, after its wheels sunk into the soft ground.

"It's suspected that the bus driver drove into the wrong road and might have been trying to make a U-turn. But the field's ground is soft and the bus got stuck. Unable to reverse the bus, a tow truck was called in.

"This area shouldn't have any buses moving inside. It is a small lane leading to HDB residences."

According to The Straits Times, workers from a tow truck company, who were on the scene, tried unsuccessfully several times to reach the bus with tow vehicles.

Mr Seah Hui Chou, a manager from People's Vehicle Recovery Service, said that his team would attempt the "rougher" method of pulling the bus out of the earth, as opposed to trying to level the bus so that it can be driven out.

Workers attached a chain to a part of the rear end of the chassis, which has a risk of being damaged from the procedure. SMRT engineers gave the green light for this to be done.

The bus was finally towed away at 10.10am, after being successfully removed from the mud and an SMRT employee drove it out of the field onto the road.

SMRT vice-president for corporate information and communications Patrick Nathan told The Straits Times: "The bus captain was returning the vehicle to the bus depot early this morning when he took a wrong turn and attempted to make a U-turn on the field."

Apologising to residents for the noise that the incident had caused, he added that SMRT is investigating the matter.

Watch a video of the incident that Victor filmed below.