Horrific moment on TPE as lorry skids across 4 lanes, hits minibus, and topples over 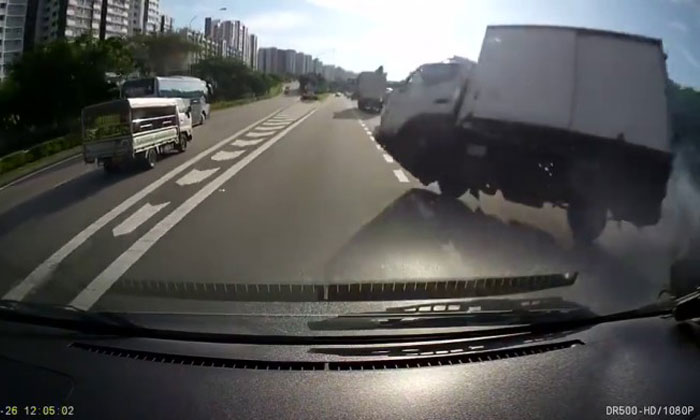 A video circulating online shows a lorry skidding across four lanes on the Tampines Expressway (TPE), hitting a minibus, and then toppling over.

The video of the accident which took place on Thursday morning (Nov 17) at 8.21am was published by Beh Chia Lor - Singapore Road.

In the minute long video, the white-coloured lorry can first be seen travelling on the third lane of the expressway.

The driver then lost control of the vehicle and the lorry started skidding on two wheels across the expressway, hitting a minibus in the process.

Screams can be heard in the minibus as its passengers realised that it was going to hit the lorry.

Following the collision, the lorry toppled over its left side and was dragged by its momentum for a short distance before finally coming to a halt.

The driver can be seen opening the door of the lorry shortly after.

"On 17 November 2016 at 8.21am, Police were alerted to an accident involving a lorry and a minibus along the TPE towards the PIE.

"The 24-year-old male lorry driver was arrested in relation to the accident.