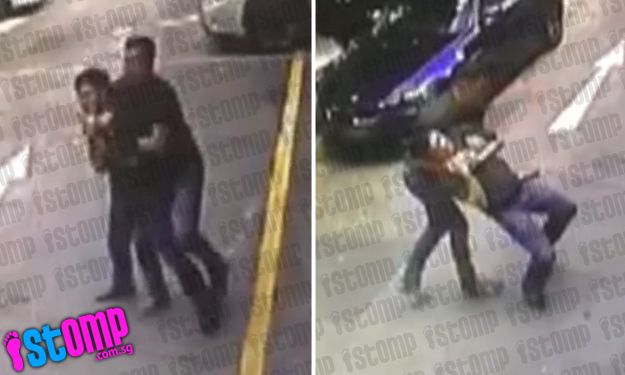 A BMW driver was caught on camera punching, strangling and choking another man over a parking dispute at Commonwealth Car Mall on Friday afternoon (Jul 17).

Stomper S said a witness had sent her a video of the incident, which she then contributed to Stomp.

According to her, the dispute first started when the BMW driver, whose parking had caused an obstruction, was asked to move his vehicle.

The video shows both men in a heated argument, before one attacked the other.

"A used car salesman was being punched, strangled and choked by a car dealer boss at Commonwealth Car Mall.

"This incident happened on July 17, at around 2.30pm when the salesman informed the bully to shift his BMW.

"The BMW was causing an obstruction to the road. If you notice carefully, he had parked his car outside the yellow line and in the opposite direction of the one-way road.

"A police report has been filed and we hope that the SPF will take action against any types of gangster acts and road bullies."

S added that the incident is currently under investigation.