Home without a home: Homeless family of 5 calls lorry their 'moving bungalow' 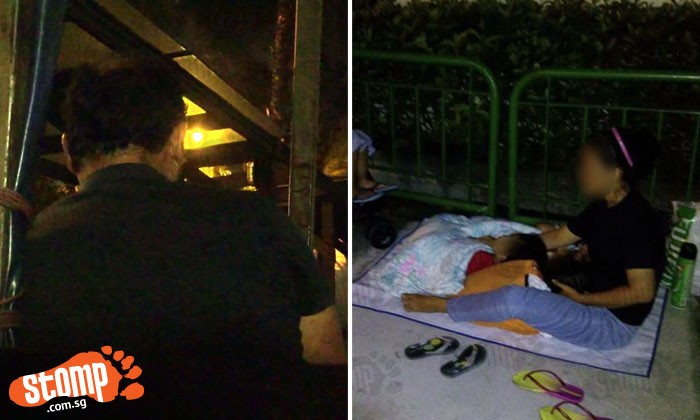 For six months, the back of a lorry was where 'R', his 35-year-old Filipina wife, as well as his three children aged 2, 4 and 6 called home.

The Stomp Team paid 'R' a visit on Dec 16 after Stomper Zul alerted us to his situation. There, 'R' revealed to us how life was like for him and his family as homeless people.

'R' and his family have not had a proper house for almost two years. Prior to staying in the lorry, the family have been living in East Coast Park.

"The lorry was our 'moving bungalow' and the lighthouse at East Coast Park was our 'condo'. That's the nickname we had for the places we stayed at."

'R', who is currently working as a security guard, uses the money he earns to pay for food. He also said that he occasionally received food items from passersby.

When 'R' went to work, his wife would take the children to a nearby playground to spend the day as well as to air laundry that was washed in a public toilet.

The 40-year-old also said that shortly after the flat was sold in November 2013, his wife's home in The Philippines was damaged by Typhoon Yolanda. He told us that he used part of the money from the sale of his house to pay for repairs.

'R' had tried to apply for an HDB flat again, but his application was rejected as he could not produce the required documents to show how the cash proceeds from the sale of his previous house were used.

'R' also could not rent a flat as he was earning around $2,000 at his current job. HDB flats can only be rented to applicants whose gross monthly household income do not exceed $1,500.

For around six months, the family stayed at 'R's' father's flat together with nine other people. However, they moved out following a family dispute.

'R' has been left without a proper home ever since.

When contacted, a spokesperson from HDB released a statement about 'R's' situation:

"HDB rental flats are heavily subsidised and meant for needy citizen families, who cannot afford to buy a flat and have no other housing options or family support. Those who can afford home ownership flats should not apply for rental flats.

"In order to safeguard the flats for the truly needy, applicants must meet a set of eligibility criteria, such as a gross monthly household income not exceeding $1,500. Those who have previously owned a flat and have sold their flat with substantial proceeds, will not qualify for rental housing.

"Nonetheless, HDB is prepared to exercise flexibility to help families in hardship on a case-by-case basis. To enable us to review their case, we would require them to submit documents, for instance to show how their sales proceeds had been used.

"In the case of 'R' (Stomp is not revealing his full name to protect his identity and that of his family members), he used to own a 3-room flat.

"When he sold the flat in 2013, he received substantial proceeds from the sale (of which more than $200,000 were cash proceeds, and about $80,000 in CPF refund), after settling the outstanding loan.

"With these proceeds, he could rent a flat in the open market or buy another HDB flat.

"'R' had applied to buy a new flat in November 2016. If he successfully books a new flat, we will consider how best to help him and his family. This could include assisting him with interim rental housing while he awaits the completion of his new flat, and reviewing his request for a second HDB concessionary loan.

"We understand that MSF (Ministry of Social and Family Development) has also rendered assistance to the family and housed them in the New Hope Shelter, where a social worker from a Family Service Centre is assisting them.

"We would like to clarify that throughout our encounters with 'R', he did not mention that he had sold his flat to pay off his sister’s debts and to rebuild his mother-in-law’s house in Philippines, even when we asked for documents to show how his substantial sales proceeds had been used to review his appeal.

"In implementing our policies, we are mindful that there could be cases that merit special consideration. We will look into the circumstances of each case and consider the best way to help those in urgent need of a flat."

When contacted on Jan 11, 'R' told Stomp that he is temporarily staying with another family in an HDB flat as part of an arrangement by the MSF.

He is currently waiting for the result of his latest application for an HDB flat, that according to him will be announced sometime in February.

See how life was like for him and his family when they called the lorry home in the videos below.