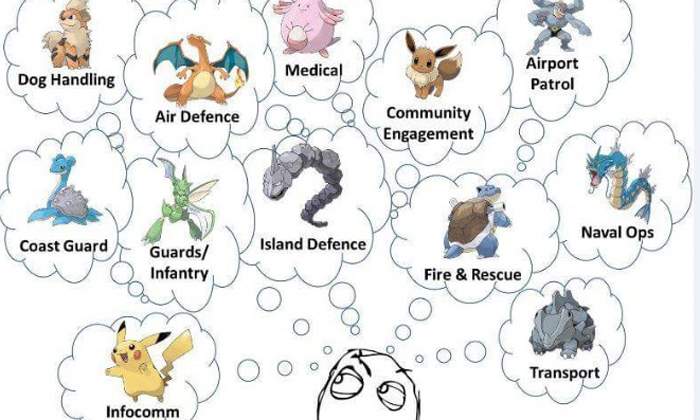 Young men starting national service (NS) in November next year will be able to choose from 33 vocations across the Singapore Armed Forces (SAF), and the Internet has had some funny reactions to it.

Stomper Wee Teck alerted us to a photo by The Reservist, which shows the corresponding vocation to a Pokemon.

According to My Paper, the men starting NS in November next year will be able to choose from 33 vocations across the Singapore Armed Forces (SAF), police and civil defence, but not the Commandos and naval diving unit, whose requirements are more stringent.

Defence Minister Ng Eng Hen announced in July that the interests of new enlistees will be considered in assigning NS vocations, alongside factors such as physical fitness, suitability to perform tasks and operational needs.

The 33 vocations, from armour, fire and rescue to dog handling, will be grouped into seven categories.

Pre-enlistees, who cannot choose whether they go into the SAF, police or civil defence, have to pick at least two choices from each category, or 14 choices in all.

They may also indicate that they have no specific interest.

Full-time national servicemen (NSF) enlisting in November next year will be the first to indicate their vocation preferences.

They will do so when they report to Central Manpower Base (CMPB) for pre-enlistment procedures. They state their choices in the same sitting as the computerised aptitude test during pre-enlistment medical screening.

They will receive their vocation posting after their basic training.

CMPB takes in more than 20,000 enlistees a year over intakes in November, February, May and August.

"The whole intent of this initiative is to encourage greater ownership by our servicemen in the roles they will play during NS."

However, he emphasised that operational needs of the vocations still take priority as the key consideration in the deployment of NSFs.

Rupert Gwee, director of National Service Affairs Directorate at the Ministry of Home Affairs, said: "This initiative... will further encourage our Home Team national servicemen to take greater ownership of their contributions in ensuring Singapore's safety and security."

Should enlistees not get their preferred vocation and appeal, these will be looked at case by case. However, there is a low chance they will be redeployed from the originally assigned vocation.

Related Stories
SAF personnel show off their suave side at Changing of Guards Ceremony outside Istana
So atas! See what soldiers in the S'pore army get to eat outfield
More About:
Army
Pokemon GO
meme
pokemon
SAF