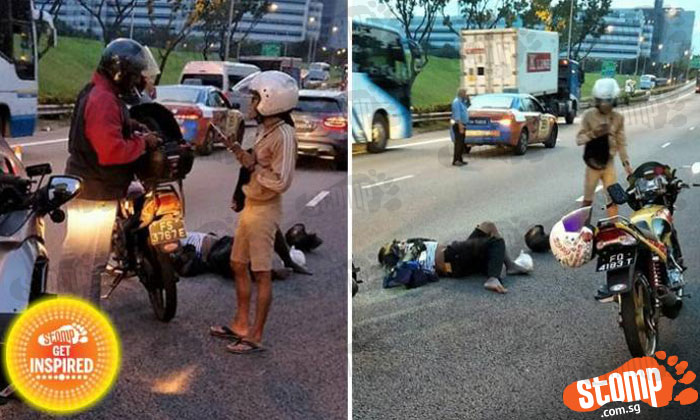 Stomper Iskandar was riding along the AYE in Jurong this morning at around 7am when he came across an accident involving a taxi and a motorcycle.

In a telephone interview, the Stomper said that a tyre cover in the front of the taxi became dislodged and flew into the motorcycle.

The rim jammed the motorcycle's rear tyre, sending both the bike and the rider falling onto the road.

Iskandar believes the handle bars fell on the rider's body and broke his ribs.

Following the accident, not one but three motorcyclists, including the Stomper, rushed to the aid of the victim.

Iskandar had a first aid kit on his bike, and tried to render medical aid to the victim.

Seeing that the latter had difficulty breathing however, he decided to wait for paramedics and proceeded to direct traffic away from the accident scene.

He was assisted by another motorcyclist.

A third biker who was formerly from the SCDF helped calm the victim down.

The injured motorcyclist was then taken away in an ambulance.

"Kind reminder to all the vehicles that have rim covers, for safety purposes, please ensure that your rim covers are secured fully (double secure it with cable ties) to avoid this kind of mishaps.

"It’s nice to see fellow road users assisting one another in such situations rather than slowing down and whipping out their gadgets taking videos or pictures or hogging the road resulting in heavier traffic flow.

"Speedy recovery to the fellow rider and hats off to the humanity of the others who helped."